When multi-tasking, each half of the brain focuses on different goals 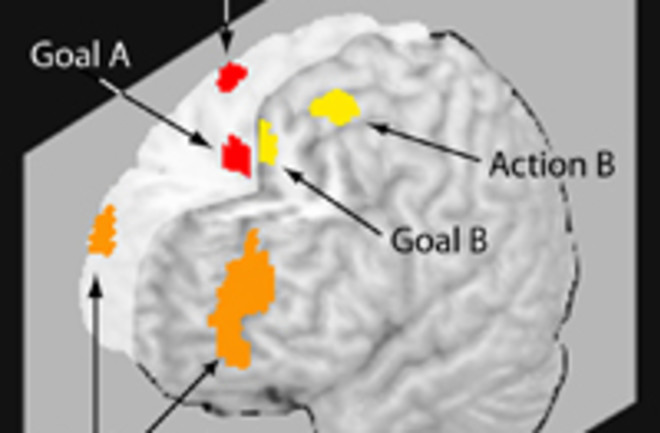 In the digital age, many of us are compulsive multi-taskers. As I type this, I’m listening to some gentle music and my laptop has several programs open including Adobe Reader, Word, Firefox and Tweetdeck. I’ve always wondered what goes on in my brain as I flit between these multiple tasks, and I now have some answers thanks to a new study by Parisian scientists Sylvain Charron and Etienne Koechlin. They have found that the part of our brain that controls out motivation to pursue our goals can divide its attention between two tasks. The left half devotes itself to one task and the right half to the other. This division of labour allows us to multi-task, but it also puts an upper limit on our abilities. Koechlin has previously suggested that the frontopolar cortex, an area at the very front of our brains, drives our ability to do more than one thing at a time. It allows us to simultaneously pursue two different goals, holding one in the ready while we work on the other. Just behind the frontopolar cortex lies the medial frontal cortex (MFC), an area that’s involved in motivation. It drives our pursuit of multiple goals, according to the rewards we expect from them. Koechlin wanted to understand how these two areas cope with multi-tasking. To do that, he used a brain-scanning technique called functional magnetic resonance imaging (fMRI) to study the brain activity of 32 volunteers, as they carried out a challenging task. They saw a steady stream of letters, all from the word “tablet”. For every block of three letters, they had to say if the first one was a “t” and if the other two appeared in the same order that they would in “tablet” (e.g. TAB rather than TEB). If the letters were red, they would get a sizeable cash reward but if they were green, the reward would be smaller. Based on this same set-up, they had to cope with two slightly different tests. In the “branching” tests, they had to deal with two separate streams of triplets, a primary one indicated by normal letters and a secondary one indicated by italics. The primary stream was continuous and the volunteers had to revert back to it every time they finished a secondary triplet. They had to hold the primary stream in mind so that they could return to it after their interruption. In the simpler “switching” tests, they started afresh with every new triplet, so they only had to cope with a single stream of information.

Charron and Koechlin found that in the switching tests, when the volunteers were only faced with a single task, both halves of their MFC were active, particularly the dorsal anterior cingulated cortex (dACC) and the presupplementary motor area (PMA). The more money was at stake, the stronger the activity in these regions. In the branching tests, both halves of the MFC were also active, but they were split between the two tasks. The right dACC took control of the secondary task; when the volunteers could earn more money from these triplets, only the right dACC became more active. The left half took control of the primary task; its activity matched the rewards associated with the primary triplets but not the secondary ones. The frontopolar part of the brain also became active during the branching tests, which fits with its established role in multi-tasking. However, its attentions weren’t divided by the two tasks and it only became more active when both the primary and secondary rewards were higher. This suggests that the frontopolar cortex plays the role of coordinator. While each half of the MFC encodes the incentives of pursuing each separate goal, the frontopolar cortex encodes the incentives of pursuing both goals together. It also suggests that we might not be able to cope with more than two tasks at the same time. Charron and Koechlin tested this with an even more fiendish “double branching” test, where the two streams of triplets in their original experiment were interrupted by a third stream. To succeed in this task, they had to retain three separate lanes of information at the same time. They couldn’t. When they tried to return to the first stream from the second, or the second from the third, their answers were no better than guesswork. Despite what some psychologists have suggested, it seems that the human brain is capable of multi-tasking although to a far lesser extent than a computer can. While my laptop is running several different programs at once with nary a hint of discomfort, Charron and Koechkin’s work suggests that my brain can’t handle any more than two tasks at once. Reference: Science http://dx.doi.org/10.1126/science.1183614More on multi-tasking: Information overload? Heavy multimedia users are more easily distracted by irrelevant information //