When a Woman's Personality Shifts Dramatically, Doctors Race to Keep Up 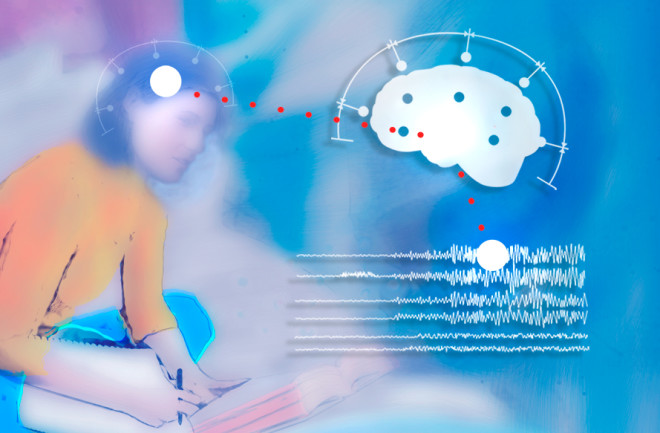 I knew something was odd when the nurse insisted that she accompany me into my patient’s room for my own “protection” — but then again, this was the psych ward. The nurse led me through two sets of metal doors to meet a glowing 46-year-old woman named Melissa — glowing not only because of her orange blouse and tight, fluorescent blue pants, but also because of her pasted-on smile, as if ecstatic to be involuntarily hospitalized. She sat cross-legged on the bed with a Bible in her lap, taking furious notes, until she noticed me standing there.

“Hello, doctor!” she said. “You have some sexy legs there, don’t you?”

I don’t, and I was starting to get a sense of her symptoms. Standing next to her was Anthony, her friend and co-worker, who explained the situation. Melissa worked as a financial analyst and was typically a model employee, but today at work, her colleagues became concerned that she had had a mental breakdown. She walked from office to office proclaiming, “I am God,” and promising to forgive the sins of her “children” who worked in the office. She repeatedly hugged her male colleagues while declaring how much she loved their feet. Ultimately, Anthony brought her to the hospital after she inquired about whether he’d ever received a foot massage from the hands of God.

When the Dots Line Up

People often say that practicing medicine is like connecting the dots, and the simpler the line, the more plausible the hypothesis. The first dot in this case: Melissa had a history of depression and was on the antidepressant Zoloft. The second dot: She had exuberant, even manic symptoms. A simple line connects them: bipolar disorder, the condition in which people have both depressive and manic episodes.

And despite being on a low dose of an antidepressant, she was generally a happy, high-functioning person. Melissa was religious, always with a Bible within arm’s reach, but she’d never imposed her beliefs on others or had religious delusions like this before. Her sudden deterioration, the psychiatrists argued, was less likely the cause of a long-standing psychiatric condition, but rather from a newly acquired neurological one.

The psychiatrists specifically implied a certain category of neurological disease called encephalitis. It’s an inflammation of the brain caused by infection, though it can also be autoimmune in nature, meaning the body’s immune system itself attacks the brain. Encephalitis can affect various regions, such as the brainstem or frontal lobe, but the temporal lobes (beneath the temples) are the most common, and inflammation there leads to a characteristic set of psychiatric symptoms.

Patients with temporal lobe encephalitis, often called limbic encephalitis, become confused, even psychotic. They can behave like patients with mania or new-onset schizophrenia, and they often end up in psychiatric wards before doctors realize their condition may actually be neurological. Some of the telltale clues are a fever or seizures, which are caused by irritation of the temporal lobe. Melissa hadn’t had any fevers, though, and she said she’d never had seizures.

Nevertheless, we began testing for encephalitis, starting with an MRI of the brain. Unfortunately, the radiologist found no evidence of the condition, though it doesn’t completely rule out the possibility.

Another way to diagnose the disease is through a lumbar puncture, or spinal tap. The procedure uses a needle to drain a sample of cerebrospinal fluid (CSF) from the lower back, the same fluid that coats the brain. If the brain is inflamed, the evidence would show up in the CSF. We ran the test, but once again, all the tests came back normal.

I called the psychiatrists, apologetically, with the results. They said the news of normal results was simultaneously wonderful and confusing: Without any medical treatment, Melissa had suddenly, and mysteriously, gotten better. She was completely back to normal, they said, but they had no idea why. I was happy to hear she’d recovered — but what did she recover from?

Finding the diagnosis now felt more like finding a constellation in the night sky: There were more dots than I knew what to do with, and most were not part of the picture. My job was to look out upon the endless array of bright lights and not simply draw a line, but by connecting a few of the shiniest beacons, find the Big Dipper.

Hoping to locate one such star, I visited Melissa again. I asked her a long list of questions about whether anything like this had happened to her before. She said this was the weirdest experience of her life, and she’d never had another like it.

“And you’ve never had a seizure before?” I asked again.

“What about short periods of time that you don’t remember, or staring spells where you lose track of what you’re doing or talking about? Has that ever happened to you?”

“Sometimes that happens, yes. I stare off sometimes, but that’s probably just my ADD.”

This was news to me. “You were diagnosed with attention deficit disorder?”

“No. I just have it. It’s not a big deal. It’s just been acting up recently.”

Before I could reply, the nurse walked in to tell Melissa that if she wanted to order dinner, she would have to do it soon, before the kitchen closed. Melissa thanked her and quickly grabbed the menu, lifting it in front of her face.

On the back of the menu, scrawled around the dessert selection and in between the entries on the drink list, were meticulous notes about each menu item. I couldn’t help but comment, asking Melissa if she typically put so much thought into dessert.

She laughed. “Yeah, I take a lot of notes. You should see my Bible.” She showed me it; almost all the white space, every gap or margin, was covered in blue cursive.

That’s when it struck me. The religious behavior, the overt sexuality, the waxing and waning symptoms, the “ADD” self-diagnosis, the excessive note-taking. I knew how to connect them. There’s a condition known as Geschwind syndrome, which presents with a constellation of symptoms including hyper-religiosity, atypical sexual behavior and hypergraphia (excessive and abnormal writing behavior). The syndrome is seen in people with temporal lobe epilepsy, meaning they also have seizures. Episodes of “spacing out” that occur in adulthood can be brief seizures, though they are frequently waved off as normal or incorrectly called attention deficit disorder.

In temporal lobe epilepsy, the religious, sexual and writing behaviors can be part of the patient’s personality, but the symptoms are often amplified after a seizure. Once the seizure passes, the symptoms gradually fade as well, until the patient returns to her former self, as Melissa did.

An electroencephalogram, or EEG, confirmed the diagnosis by finding abnormal brain waves arising from Melissa’s left temporal lobe. Even though she’d already returned to normal, we started seizure medication to prevent future staring spells or odd behavior at work. But I still wanted to check one more thing.

On an MRI, patients with temporal lobe epilepsy sometimes have a white dot emanating from the temporal lobe. The speck of brightness is often so subtle that radiologists may miss it unless they are deliberately seeking it out. I opened Melissa’s MRI file and scrolled to her temporal lobe. Sure enough, hidden amid the shades of gray matter, was a faint glow, like that of a dying star, the last bright dot missing from the constellation.

Eliezer J. Sternberg is a neurologist at Massachusetts General Hospital and the author of NeuroLogic: The Brain's Hidden Rationale Behind Out Irrational Behavior. The cases described in Vital Signs are real, but names and certain details have been changed. This story originally appeared in print as "Connect the Dots."