Last year, I blogged about a new and very pretty way of displaying the data about the human 'connectome' - the wiring between different parts of the brain. But there are many beautiful ways of visualizing the brain's connections, as neuroscientists Daniel Margulies and colleagues of Leipzig discuss in a colourful paper showcasing these techniques. Here, for example, are two ways of showing the brain's white matter tracts, as studied with diffusion tensor imaging (DTI): 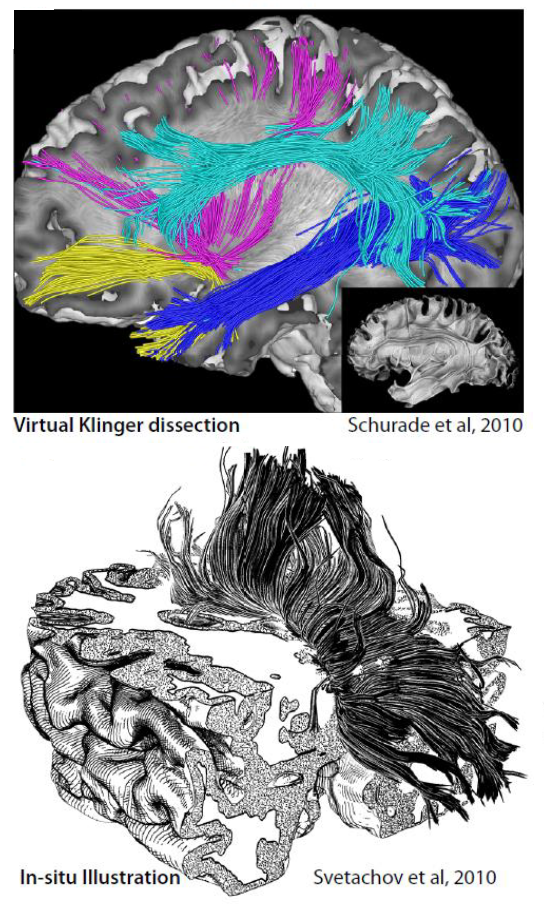 Another striking image is this one, a representation of the brain's functional connectivity - the degree to which activation in each part of the brain is correlated with activity in every other part. The functional connectome is inherently difficult to visualize in 2D (or even 3D), but in this ingenious display, the brain's surface is shown covered with hundreds of little brains, each one a colour-coded map of the connectivity from that particular point: 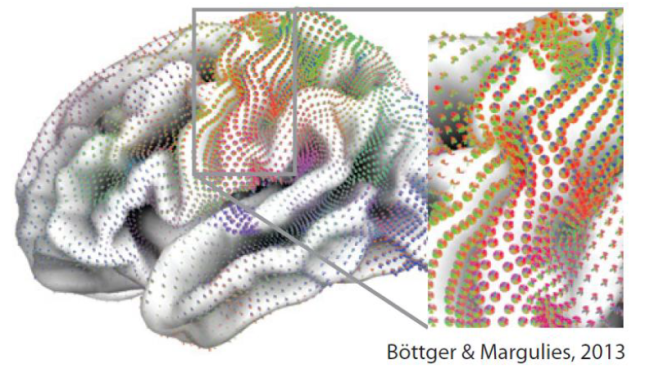 The Margulies paper is about more than just pretty pictures, though. The authors also discuss the scientific questions and theoretical tensions that surround the choice of one visualization over another:

Scientific figure and illustrations are - to paraphrase Tufte - where seeing turns into showing. The capacity of these images to influence our interpretation of data and to direct the questions of the scientific community make visualizations worthy of careful consideration during their production... If we present a figure that clarifies the scientific content, but does so by creating a distortion of brain space, is that bad practice? What if the caption and methods explicitly stated that the contents of the figure were not to be taken literally? To what degree should a visualization be allowed to stand alone?

In my view, the study of connections has been dominated by images, more than any other branch of neuroscience. It's rarely easy to say where 'method' or 'analysis' ends and 'visualization' begins. This is not a bad thing - connectivity is spatial, by definition, and to understand space is to visualize it. But it does mean that in the connectome, there is always a danger of valuing aesthetics over accuracy, beauty above brains.