Visual Face-preference in the Human Fetus?

Even before we're born, human beings are sensitive to face-like shapes, according to a paper just published in Current Biology. British researchers Vincent M. Reid and colleagues of the University of Lancaster used lasers to project a pattern of three red dots onto the abdomen of pregnant women. The lasers were bright enough to be visible from inside the womb. The dots were arranged to be either "face-like", i.e. with two "eyes" above one "mouth", or inverted. The inverted condition was a control. 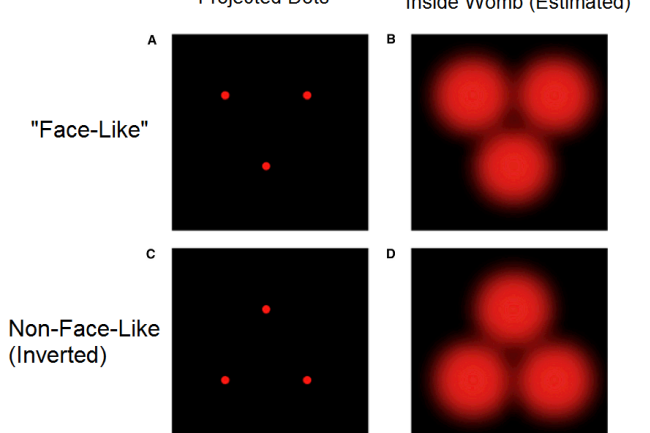 Because the fetus is thought to have better peripheral than central vision, the stimuli were presented at the edge of their visual field and were made to move laterally over about five seconds. Using 4D ultrasound to record fetal movements, Reid et al. found that a fetus was more likely to turn its head towards the moving "face-like" pattern, compared to the inverted control pattern. 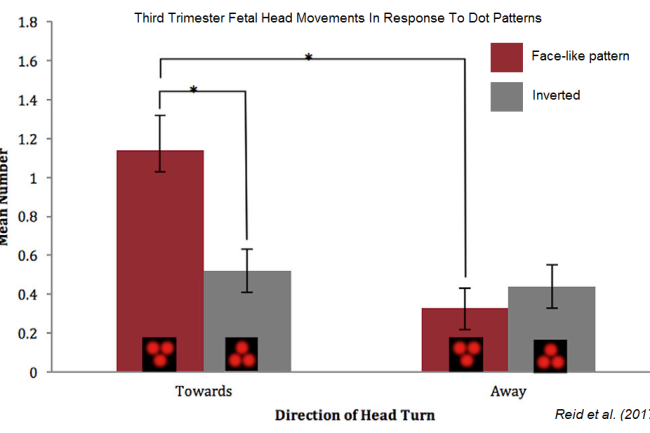 This is a striking result. Previously, it has been shown that three-dot face-like stimuli engage the attention of newborn babies more than inverted stimuli, but this is the first study to look at prenatal visual preferences. Reid et al. say that while a sensitivity to face-like patterns may be an innate feature of the human brain, it's also possible that the preference arises from some kind of prenatal visual experience:

These results indicate that the fetus in the third trimester is more likely to engage with stimuli featuring an upright face-like configuration when contrasted with an inverted configuration. We therefore conclude that postnatal experience is not necessary for the emergence of a preferential visual system for facelike stimuli. This finding rules out rapid postnatal learning, such as filial imprinting, as a mechanism for this visual proclivity. These mechanisms may be innate, or, possibly, the perceptual bias is triggered by exposure to patterned light in the womb during prenatal visual experiences.

The authors stress that their data doesn't imply that the fetus can actually see the faces of people outside the womb (!)

It should also be noted that the results of the present study do not imply that the fetus can respond to faces presented externally under everyday circumstances. The behavior that has been demonstrated in the current study derives from the specific conditions of the experiment.

In my view this is an interesting study and a very nice experimental paradigm. I did have one concern when I read the paper, related to the methodology. Is it possible that the laser apparatus was exerting a physical pressure on the womb, in such a way that the fetus might detect? Notably, the experimenter holding the stimulator was not blind to the condition (whereas the researchers rating the ultrasound images for head turns were blinded). I asked the first author, Prof. Reid for a comment on this. He kindly replied, saying that it's unlikely that physical pressure could explain the results:

Theoretically it is possible that differential pressure could yield a difference in fetal response between conditions. Here are the reasons why I do not think that differential pressure is a plausible explanation for the results that we have reported. Increased pressure would likely induce more overall movement in the "increased pressure" condition than the "lesser pressure" condition. This would produce a loss of ultrasound image of the face in one condition over the other. If the fetus moves too much, the 4D image of the face moves out of the scanning pathway. We did not observe any difference in data quality between the conditions. Secondly, it does not make sense to me that differential pressure would manifest as a specific behaviour - of orienting towards the stimuli. Overall fetal movement would be the likely response due to increased pressure. Finally, the amount of pressure to gain a differential fetal response would need to be quite substantial and it would need to be consistently differential between conditions. The only way that this could happen would be if the experimenter explicitly and consciously applied substantial pressure in one condition but not in the other. That is something that didn't happen in this study. Experimental behaviours, including the pressure and speed of stimulus movement, were kept as consistent as possible in order to be replicable.