Transhumanism: A Secular Sandbox for Exploring the Afterlife? 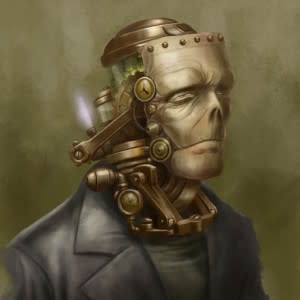 I am a scientist and academic by day, but by night I’m increasingly called upon to talk about transhumanism and the Singularity. Last year, I was science advisor to Caprica, a show that explored relationships between uploaded digital selves and real selves. Some months ago I participated in a public panel on “Mutants, Androids, and Cyborgs: The science of pop culture films” for Chicago’s NPR affiliate, WBEZ. This week brings a panel at the Director’s Guild of America in Los Angeles, entitled “The Science of Cyborgs” on interfacing machines to living nervous systems. The latest panel to be added to my list is a discussion about the first transhumanist opera, Tod Machover’s “Death and the Powers.” The opera is about an inventor and businessman, Simon Powers, who is approaching the end of his life. He decides to create a device (called The System) that he can upload himself into (hmm I wonder who this might be based on?). After Act 2, the entire set, including a host of OperaBots and a musical chandelier (created at the MIT Media Lab), become the physical manifestation of the now incorporeal Simon Powers, who's singing we still hear but who has disappeared from the stage. Much of the opera is exploring how his relationships with his daughter and mother change post-uploading. His daughter and wife ask whether The System is really him. They wonder if they should follow his pleas to join him, and whether life will still be meaningful without death. The libretto, by the renown Robert Pinsky, renders these questions in beautiful poetry. It will open in Chicago in April. These experiences have been fascinating. But I can’t help wondering, what's with all the sudden interest in transhumanism and the singularity? 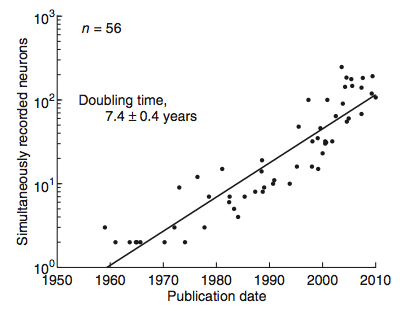 The media is so saturated with the claim that the Singularity will arrive by 2045 that skeptics are by default on the defensive. Worth noticing amidst the rancor is a recent result by friend and colleague Konrad Kording, who just showed that the number of neurons that we can simultaneously record from is following Moore’s Law. Not long ago, we were limited to recording the activity of a single brain cell at a time; more recently, we can record from several hundred at once. When you examine the trend over 56 different studies, Kording and his student showed that the number is doubling every seven years. Although this is a longer interval than Moore’s Law (two year doublings), what’s really important is that the growth is exponential. Exponential growth lies at the heart of the arguments for the nearness of the Singularity. Given Kording’s result, however, how long do you think it will be before we can record from every neuron in the brain at once? You might be surprised: even with this incredible exponential growth, it will take 220 years. If we suppose that uploading our consciousness will at a minimum entail recording the pattern of activity of the entire brain (why not--it’s no less plausible than every other argument out there), then we can’t even get cracking until 2231. Of course, the time of the Singularity is not the time when we can upload consciousness, but rather when we create super-intelligent machines (which, according to some, will then devote themselves to figuring out how to beat aging and upload our consciousness, rather than chasing us to the ends of the galaxy). Whether 2045 is reasonable is hotly debated. I expect it’s on the short side by a century or so--but as someone who often thinks in evolutionary time scales, I still view this as an inconsequential amount of time. But if we weigh the evidence for when the Singularity will occur versus the evidence for world-wide environmental destruction (such as that we’re now exceeding three of ten “planetary boundaries” for sustainable human existence), it’s pretty clear that these threats to our continued existence as a species are looming far faster on the horizon than either the Singularity or uploaded immortality. So what’s going on? Is environmentalism “tired” and transhumanism “wired”? Is transhumanism just a fleeting new fascination like colonizing space was not long ago, and this soon will also pass? Or is there something more primal going on? As I pondered these questions recently, it occurred to me that perhaps the transhumanism trend has something to do with secular people--as scientists, engineers, and sci-fi fans tend to be--having an outlet for talking about things that people with religion have more established frameworks for expressing. Consider this: Scott Atran, among others, has argued that the urge for religion has an evolutionary basis, rooted in our fears of death and predators. Since Darwin, if not before, it's become increasingly difficult, though, for scientifically-minded people to put stock in religion. Added to this, it's difficult to have conversations in public about religion, not least because we live in a multi-denominational society where the public expression of creed can be viewed as exclusionary. It’s simply not politically correct in many instances. What if the reason for the rapid spread of Singularity and transhumanism talk is that it’s giving people a secular outlet for thinking through their fears of death and dreams of immortality? A great deal has been written about relationships between religion and transhumanism. Much of it has drawn parallels between transhumanism and religion. But I don’t think that transhumanism is trying to be a religion: I think that it’s giving secularists (like me) an opportunity to talk publicly about death, the afterlife, and the strange puzzles of personal identity that will someday arise in transforming ourselves into cyborgs, copies of our original selves, or fully digital beings (which I've explored here, here, and here). It is letting us safely explore these ideas in a less morose way than the typical meat-to-worms narrative to which secularists are usually limited. In doing so, perhaps it is filling a void that religion used to fill but no longer can for many of us.

Image of cylon by Shawn Sharp, from DVICE's steampunk cylon contest, via GIZMODO.