Time to Rethink the Reconsolidation Theory of Memory?

An influential theory about the malleability of memory comes under scrutiny in a new paper in the Journal of Neuroscience. The 'reconsolidation' hypothesis holds that when a memory is recalled, its molecular trace in the brain becomes plastic. On this view, a reactivated memory has to be 'saved' or consolidated all over again in order for it to be stored. A drug that blocks memory formation ('amnestic') will, therefore, not just block new memories but will also cause reactivated memories to be forgotten, by preventing reconsolidation. This theory has generated a great deal of research interest and has led to speculation that blocking reconsolidation could be used as a tool to 'wipe' human memories. However, Gisquet-Verrier et al. propose a fundamental re-evaluation of the whole phenomenon. They propose that amnestic drugs don't in fact block reconsolidation, but instead add an additional element to a reactivated memory trace. This additional element is a memory of the amnestic itself - essentially, 'how it feels' to be intoxicated with that drug. In other words, the proposal is that amnestics tag memories with 'amnestic-intoxication' which makes these memories less accessible due to the phenomenon of state dependent recall. This predicts that the memories could be retrieved by giving another dose of the amnestic. So, Gisquet-Verrier et al. are saying that (sometimes) an 'amnestic' drug can actually improve memory. Their evidence for this comes from an experiment in rats given cycloheximide, an amnestic drug that works by blocking protein synthesis. In line with previous results, cycloheximide given after reactivation of a memory reduced later recall of that memory (red bar) compared to a control condition (blue). However, giving a second dose of cycloheximide before recall fully reversed the effect (green)! 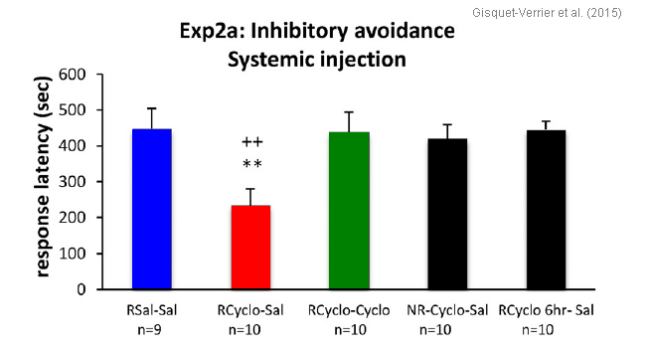 Furtheremore, Gisquet-Verrier et al. show that a different drug, lithium chloride, produces the same pattern of effects - it blocks 'reconsolidation', but this can be reversed by a second dose at the time of recall. However, lithium chloride is not an amnestic - it doesn't block protein synthesis. Rather, it causes nausea. The implication of the lithium experiment is that any drug that causes an 'internal state change', even if it's just nausea, can trigger state-dependent memory and behave just like an 'amnestic'. The authors conclude:

According to the consolidation/reconsolidation hypothesis, recently acquired or reactivated memories are transformed progressively from an initially labile state into a stable form, through a protein-dependent process. Preventing these processes should result in an irreversible impairment. This view is challenged by the present study in several ways.

Overall, this is a very compelling series of experiments. The sample sizes are relatively small, though, so it will be important to see whether these results are replicable, but if so, the reconsolidation model will be badly shaken. There may be interesting times ahead in the memory field.