This Is Your Brain on Enlightenment

The field of neurotheology strives to understand what goes on in the brains of people undergoing spiritual experiences. 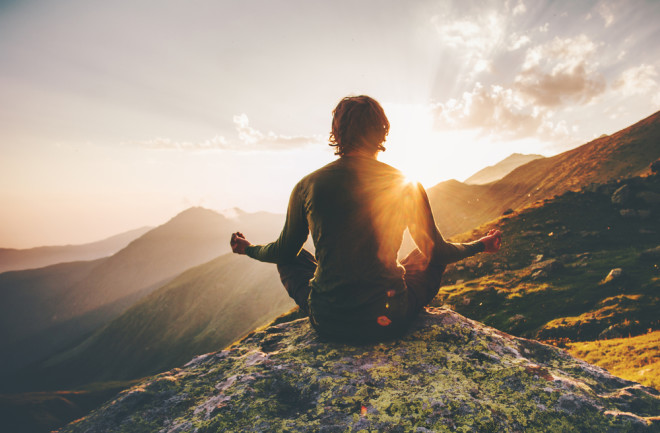 I’m perched atop a rigid pillow, its edges itchy against my parched skin, my legs crossed in front of me. The room is silent with the exception of a few late arrivals warily creeping toward an open seat. The domed ceiling towers above, its outline traced by four neon green spotlights, bold remnants of the 1980s when the Lotus temple at Satchidananda Ashram was built. Fuchsia and indigo, trimmed in gold leaf, the temple blooms amidst the honey locust trees in the rural enclaves of Buckingham, Virginia.

People come to the ashram for quiet. For peace. For meditation, and ultimately, to connect with the divine. This, according to true believers is the paramount goal of yoga’s eightfold path. My goals while visiting the ashram aren’t quite as zealous, just the ability to focus my thoughts instead of flailing about like a live fish pulled from the water. I’m hoping that the prescribed ashram schedule of three daily meditations—in the morning, noon, and night—will help hone my concentration and calm me down.

But according to Andrew Newberg, a neuroscientist and professor at Thomas Jefferson University in Philadelphia, I might be selling myself short. He says that enlightenment isn’t always as far off as we might suppose, especially for meditators. Newberg says that each time I sit for meditation I am strengthening my frontal lobe, the brain’s filing cabinet. Ordering and reordering daily tasks, culling the thoughts that no longer fit. And as a result, once in a while something funny happens. Frontal lobe function stops in its tracks. It’s quickly accompanied by a domino effect of changes to the brain that he says prime us for something called “little e” enlightenment, those life changing aha moments, sometimes referred to as periods of spiritual connection.

Newberg is a pioneer in the neurological study of religious and spiritual experiences, a field known as neurotheology. He admits that it’s essentially impossible to capture an actual moment of enlightenment on a brain scan since you never know when one will occur.

“You can’t tap someone on the shoulder and ask them if they’re experiencing enlightenment. That would ruin it,” he says.

But over the past decade, Newberg and his team of researchers have followed people on spiritual retreats and done neuroimaging during what longterm meditators call “intense spiritual experiences.” For example, in the brains of people speaking in tongues or in nuns who were experiencing what they describe as deep “periods of unity.”

In an article published in the journal Frontiers in Psychology, Newberg documented 20 years of similar findings in the brains of people who claim to experience periods of enlightenment. According to brain scans and surveys from thousands of test subjects, a few things consistently happen in the brain during deeply spiritual experiences. The parietal lobe, for example, a part of the brain that’s responsible for building our sense of self, shuts down. At the same time, the limbic system, an intricate construct of nerves and neurons woven together in the brain, is active in a way that intensifies our emotional and mood regulation. And most importantly, frontal lobe function dramatically decreases.

“This is the difference between meditation and moments of enlightenment. The frontal lobe goes from being intensely activated to having little function at all,” he says.

In his research, Newberg often works with seasoned meditators, those who are more likely to have had these experiences before. But the idea of being able to snap in and out of spiritual consciousness seems so foreign to me. Still, I’m looking forward to the prospect of giving my brain a daily workout, building my frontal lobe and seeing where it takes me. A buff brain seems a reachable goal. I run for better cardiovascular health. I take probiotics for digestion. Why can’t I meditate to build my frontal lobe? But the next step, when my frontal lobe decides to take an unplanned sabbatical from functionality, well, that seems rather fantastical. But Reverend Paraman Barsel, a long time disciple of Sri Swami Satchidananda, the man who founded the ashram in 1980, is not at all surprised by this phenomenon.

“Gurudev (Barsel’s name for Swami Satchidananda) used to say that in a way we all want to become thoughtless people,” says Barsel.

Of course, Swami Satchidananda did not mean inconsiderate or selfish, he meant literally thought-less. When the mind ceases to plan, file, coordinate, solve, and analyze. You still function in the world but it’s from a place of effortless peace, says Barsel.

And the effortless peace, well that too may be a function of changes in the brain. In one small study, researchers followed a group of Catholics undergoing intense prayer, meditation, and contemplation. Study participants underwent brain scans before and after a spiritual retreat. Brain scans after the retreat showed a 5-8 percent reduction in serotonin and dopamine transporter binding. This means that more of these feel good hormones were available in the brain, which could explain why some people report such positive emotional responses to spiritual retreats.

Barsel also agrees that meditation is the equivalent of a CrossFit session for my brain. It’s a good start, he says, and it’s where we all begin.

“You start off meditating and then you end up a million miles away from where you started,” says Barsel.

But with a regular practice you get just a little bit better at focusing on one thought for a little bit longer. You go from thousands of waves in an ocean of thoughts to one wave and then all of the sudden, there are none, says Barsel.

I’m not sure whether the waves in my ocean will ever dwindle down to none. To be honest, that seems impractical. But after six weeks at the ashram the spaces between my thoughts did grow wider. With my eyes closed, seated atop those itchy meditation pillows, the muscle of concentration in my brain seemed to grow, though I never had a brain scan to prove it.

And for Barsel, the best is yet to come. Meditation is a rung along the ladder, but it was never the ultimate goal. “It might take a lifetime (or many lifetimes) to get to that ‘instant' aha moment but once you do you’re never the same.”

More From Discover
Mind
Why Are We Addicted to Love?
Mind
Research on Psychedelics and How Mushrooms Can Help Combat Depression
Health
10 Science-Backed Ways to Boost Your Brain
Health
Extreme Fatigue: 4 of the Longest-Lasting Sporting Events
Mind
Weed Might Not Make You Creative After All
Mind
How Does Alzheimer's Disease Lead to Death?
Recommendations From Our Store
My Science ShopDiscover STEM Kits
My Science ShopDiscover 2022 Calendar
My Science ShopStrange Science
My Science ShopElements Flashcards
Shop Now
Stay Curious
Join
Our List