The Rise and Fall of Neurotransmitters

There are dozens of neurotransmitters in the human brain. How do neuroscientists decide which transmitters are most important? Are there trends and fashions in neuroscience, such that some transmitters rise and fall in popularity? I searched PubMed for nine different neurotransmitters, and downloaded the 'Results by Year' data to track the number of peer-reviewed papers published each year from 1960 to 2014. The results are very interesting: 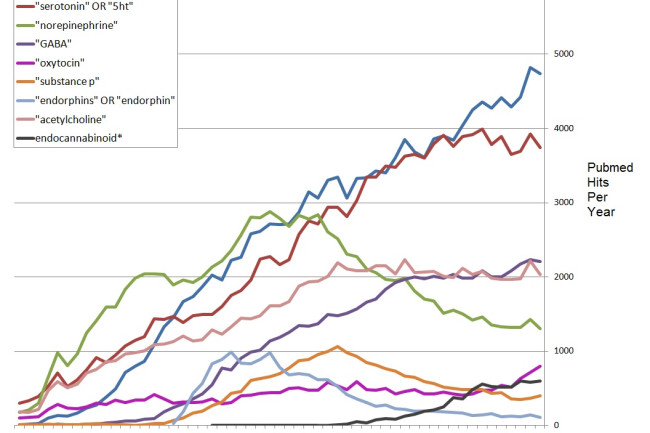 Here are some of my observations in no particular order: The stagnation of serotonin (red): after growing steadily from 1960 to 2005, the number of papers about serotonin has flat-lined. This is possibly a reflection of the stagnation of research into selective serotonin re-uptake inhibitor (SSRI) antidepressants which likewise plateaued around 2005 (although it has started to grow again lately, unlike serotonin). This, in turn, may be related to the fact that most of the SSRI drugs went off-patent around this period. However, this can't explain why GABA (purple) and endocannabinoids (black) stagnated over the same period. Hmm. Dopamine (blue) is on the march: it's the only transmitter that's been steadily growing research since 1960. The decline of noradrenaline/norepinephine (green): it was once the hottest transmitter, but something happened in the mid 1980s, and noradrenaline's research output flat-lined, and then began to shrink. What went wrong? Maybe it was related to... The rise and fall of substance p (orange) and the endorphins (pale blue): these two neuropeptides were discovered to be neurotransmitters in the late 1970s. Research on them grew rapidly but it didn't last - by the early 1990s, they had each entered a decline from which they've never recovered. At one point the endorphins were more popular than GABA, but by 2014, 28 times more papers were published about GABA than about endorphins. Note: This post is an update of one of my first ever posts, from 2008.