The Neural Precursors of Spontaneous Thoughts

Back in 2013, I wondered if we would ever discover the neural basis of spontaneous thoughts. Why, I asked, do certain ideas just "pop" into our minds at particular times? Now

a new paper published in Neuroimage,

Canadian neuroscientists Melissa Ellamil and colleagues examines this issue. Ellamil et al. recruited a group of 18 volunteers, all of whom were highly experienced practitioners of mindfulness meditation. These individuals were selected, the authors say, because they are better at the introspective task of noticing which thoughts are 'spontaneous', which can be difficult. The volunteers underwent fMRI scanning during which they were told to focus on their breathing; they had to press a button at the moment when a new thought arose. In a control task, the participants had to press a button whenever a word appeared on the screen. Ellamil et al. looked for activity that preceded the onset of each thought, as well as activity that occured at the same time and afterwards. They found some blobs: this is the comparison between thought and word trials: 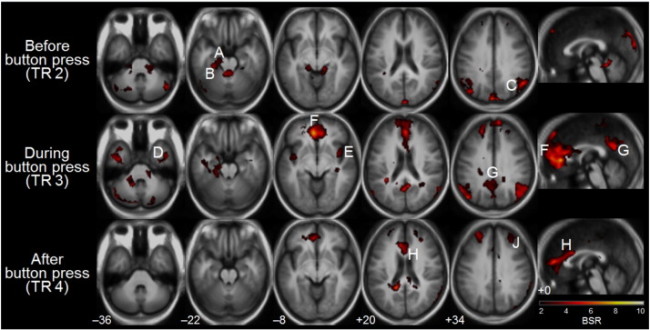 The authors say that

John Lennon famously sang, “Thoughts meander like a restless wind inside a letter box. They tumble blindly as they make their way across the universe.” What neural systems could give rise to such a wildly divergent stream of consciousness? The prominent hippocampal recruitment among the neural antecedents identified here suggests an intriguing possibility. In contrast to the connectivity of other cortical areas, where short-distance synapses to nearby neurons predominate and long-distance connections are rare, neurons within a large part of the hippocampus are equally likely to connect to nearby or distant neighbors (Buzsaki, 2006). This highly variable microcircuitry may facilitate the creation of arbitrary or unlikely connections between groups of neurons that otherwise encode distinct memories or experiences (Buzsaki, 2006). This capacity for novel connections at the synaptic level might be linked to the variability of spontaneous thought at the subjective level.

So does this mean that my 2013 question has been answered? Have Ellamil et al. shown how thoughts spring into our minds? Not yet, but thanks to Ellamil et al. we have some intriguing leads. On the other hand, I wonder if Ellamil et al.'s methdology is really picking up on thoughts per se. Their spontaneous button-pressing paradigm reminds me of the Libet experiment in which participants are asked to press a button 'whenever they feel like it'. Now, Libet interpreted his paradigm as being about volition, while Ellamil et al. were interested in thoughts, but maybe this difference is just one of interpretation? Objectively (or from a behaviorist perspective) the Libet task and the Ellamil task seem equivalent - in both cases, participants press buttons in response to 'internal cues'. Therefore, I would have liked to see a Libet paradigm as a control experiment. It would also be nice to replicate this study in 'normal' people to verify that the results are not somehow a product of meditation expertise.