A few months ago, I blogged about The Hydraulic Brain - an unorthodox theory which proposed that brain function is not electrical, but mechanical. On this view, neuroscientists have it all wrong, because nerve impulses are in fact physical waves of pressure that travel down neurons as if the brain were made up of billions of little water pipes. That was wacky. But I've just come across a hypothesis so bizarre, it makes the hydraulic brain look positively down to earth. Here's the paper, just published in Medical Hypotheses:Percussion circuits and brain function 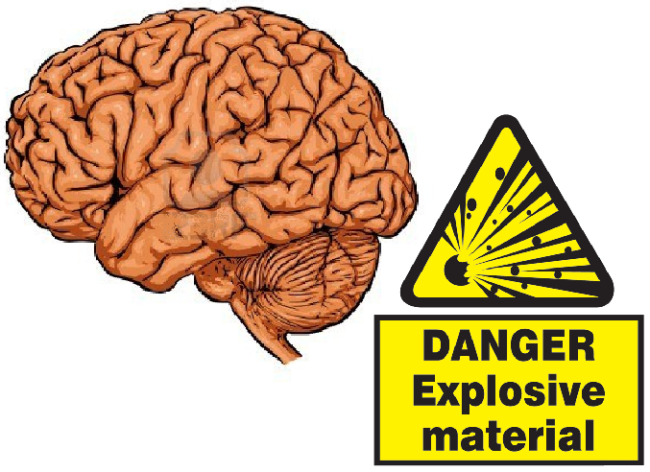 It is proposed that percussion decomposition of peroxynitrate compounds occurs in the intracellular fluids of the sensory organ and brain cells. Peroxynitrates are highly unstable and are advanced as undergoing very rapid, self-propagating decomposition (detonation decomposition) producing a charged betaine and a precipitate. The reaction liberates heat and results in the development of a sudden and rapid rise in pressure of any gas produced by the reaction or any gas present in the reaction zone. The pressure effect is transmitted as a high speed percussion pulse (detonation pulse).

Lends a whole new meaning to the phrase 'head explodes'. There is, needless to say, no evidence for this. Robertson goes on to say that most neurons do not contain explosives of their own. Rather, they relay the percussion pulses that originate from detonations in the eyes, ears, nose etc:

It is proposed that neurons contain no percussion compound and act as junctions for percussion pulse reception, distribution and redistribution... Pulses from sensory organs pass through the intercellular fluid and enter closely situated neurons. Within a neuron a percussion pulse also moves in all directions and exits through both the neuron axon and dendrites and in the former case passing to other neurons and cell membranes through the synapsis.

As if that wasn't enough, Robertson says that recall of a memory involves some kind of a reversal of this process, culminating in the actual re-emission of the remembered sensory stimulus. So when you remember the sight of something, your eyes actually emit whatever light you saw at the time - and so on:

Memory percussion pulses result in the production of energy from the sensory organ cells... For example the emission of light from eye cells by memory pulses is generated by piezoluminescence through the increase in cell pressure from the percussion reaction initiated in the sensory cells by the memory pulse [22]. In taste and scent sensory organs some of the original activating chemicals are preserved by being absorbed into the [cell]... The memory percussion pulse initiates the same chemical reactions and same scent or taste is reproduced briefly in the cells.

Finally, Robertson notes that people who abruptly stop taking certain medications (namely SSRI antidepressants) sometimes feel "brain shocks", a kind of jolting sensation. He explains this as being due to the buildup of explosive compounds over the course of the drug treatment, which are prone to detonate when the drug treatment is ended. As I said, I now have more respect for the 'hydraulic brain' theorists, whose ideas, while radical, are at least grounded in reality to some degree. And they had the decency to admit that there was no positive evidence for their hypothesis, whereas Robertson advances things like those "brain shocks" as 'supporting evidence'.