A few nights ago, I was in the audience at an event (this) for the public who were offered the chance to ask questions of a panel of neuroscientists. Now the questions varied, but listening to them, it seemed to me that many of them stemmed from a philosophical confusion, one that also affects many neuroscientists. This confusion is one that I've tackledbefore, but hearing neuroscience talked about from the perspective of normal people helped me see it more clearly. So: We have two pictures in our heads. One of these is called 'the brain', the other we call a 'person'/'soul'/'mind', or more commonly we just say I, you, he and she. These two pictures are very different - 'Brains' are simple, mechanical, static, measurable, physical, shallow, sparse. The visual image is of a smallish, yellowy-grey lump. 'People' are complex, organic, dynamic, unquantifiable, immaterial, deep, rich. The visual image is a human face. So these two concepts have nothing in common, yet (we think) science tells us that they're the same. This confuses us. We ask: how can one thing be both static and dynamic, material and immaterial? Yet if they're not the same, how are they related? Where exactly is the soul? But if it's nowhere, the brain would be doing a soul's job, and how could it - it's just a brain...? And so on. The truth is that the reason our pictures of 'the brain' and 'the mind' have no overlap is because they're only partial - they're views of the same thing from two different angles. 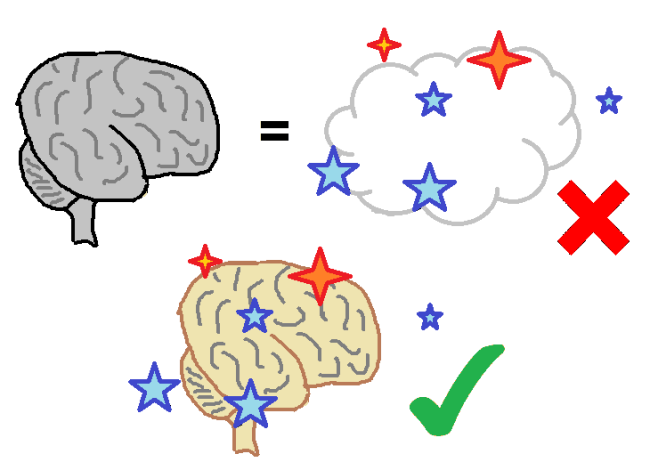 There's only one thing, and it's both a material object and a human subject at the same time. This one thing is the brain - but it doesn't correspond to your mental image labelled "brain", because (if it's anything like mine), that image could just as well denote a dead brain. What's inside the human skull is the brain; it's also the mind, in all its complexity. Everything you can say about people, you can say about the brain. If you want to know what brains can do, find a history book. If you want some pictures of brains, you could do worse than a portrait gallery. Somehow, human nature fits into a few pounds of tissue. That's astonishing, but so long as we keep in mind that 'the brain' is a thing of astonishing richness, there are no more mysteries after that. The mind-body problem, for example, doesn't arise; it was, I believe, all along really a rich-sparse problem. Here's an example of what I mean: neuroplasticity is a celebrated concept and a buzzword because it contradicts the mental image of the static, dead 'brain'. In fact, the brain's ability to change is nothing remarkable because the brain is people, and we already know that people can change, learn, adapt, and remember. Neuroplasticity is an interesting biological phenomenon, but it's nothing special, and if it seems counter-intuitive, that's a problem with our intuitions.