Social Priming: Money for Nothing?

Can the thought of money make people more conservative? The idea that mere reminders of money can influence people's attitudes and behaviors is a major claim within the field of social priming - the study of how our behavior is unconsciously influenced by seemingly innocuous stimuli. However, social priming has been controversial lately with many high profile failures to replicate the reported effects. Now, psychologists Doug Rohrer, Hal Pashler, and Christine Harris have joined the skeptical fray, in a paper soon to be published in the Journal of Experimental Psychology: General (JEPG) (preprint here). Rohrer et al. report zero evidence for money-priming effects across four large experiments. They conclude that "Although replication failures should be interpreted with caution, the sheer number of so many high-powered replication failures cast doubt on the money priming effects reported..." Each of the four experiments was a replication of one of the experiments in a previous study, Caruso et al. (2013). That paper, which also appeared in JEPG, reported strong evidence that purely incidental exposure to images or phrases related to money causes, amongst other things, an increased faith in capitalism, and the belief that "victims deserve their fate". However, Rohrer et al. report that they couldn't replicate any of the four effects they looked for. Here's their summary of the results (colors are mine): 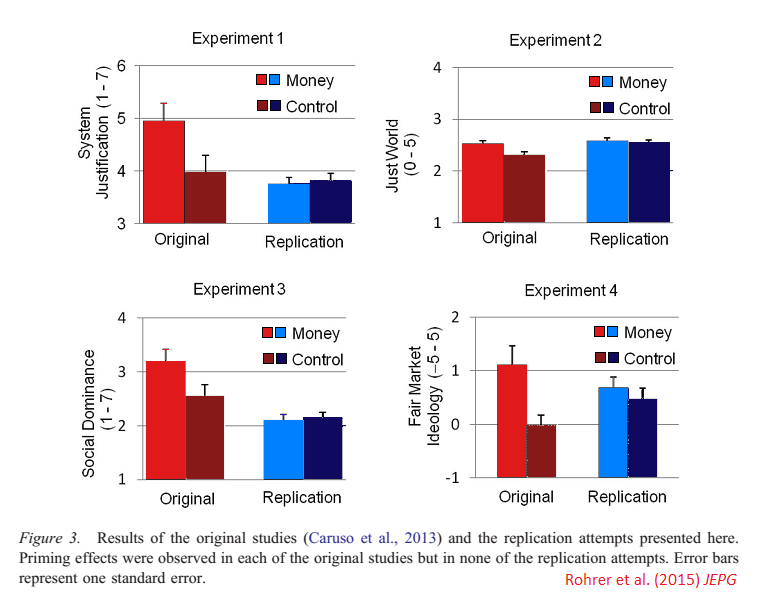 In the original studies (red bars), the 'money' condition (bright) produced increases in the various behaviors compared to the control condition (dark). In Rohrer et al.'s replications (blue), there were no differences by condition. The error bars are smaller for the blue bars too, reflecting the replications' higher sample sizes. Ouch. But it doesn't stop there. Not content with publishing their own null results, Rohrer et al. also reveal the existence of unpublished negative findings. They contacted Eugene Caruso, and also Kathleen Vohs, lead author of Vohs et al. (2006), the highly cited Science paper that first launched the money-priming paradigm. Both authors were helpful, they say, and they learned the following: For Vohs et al. (2006), "the authors conducted two additional money priming studies that showed no effects, the details of which were shared with us." and "reported nine dependent measures that were statistically affected by the manipulation in the predicted direction (one in each experiment) but did not report 19 additional measures that were statistically unchanged". Meanwhile, Caruso et al. said that they "conducted four studies showing a null effect that were not included in the paper, and two of their five reported studies included one or more unreported dependent measures". Finally, Rohrer et al. note that currency priming a la Caruso et al. (2013) was part of the Many Labs Project, a large collaborative effort to replicate thirteen claims in psychology. This showed no evidence for the money priming effect (or for another kind of social priming). In her response to Rohrer et al., Vohs notes that there have been 165 published reports of money-priming, from researchers in 18 countries. She suggests that the reason why Rohrer et al. did not find any money-priming effects whereas Caruso et al. did may lie in the nature of their participant samples: Caruso's participants were mostly University of Chicago students, and this university is known for its achievements in economics. Vohs says that Chicago students may have had a more positive attitude to money, and thus be more prone to money priming, than Rohrer's participants, who were drawn from an online pool of volunteers at UCSD and from Amazon MTurk. In my view, this kind of post-hoc explanation for negative findings is unfalsifiable and not very helpful. It also seems slightly implausible in this case, because of the sheer number of different populations in which the money priming effect has been reported. As Vohs herself says, "People in North America, Europe, and Asia, show similar effects. College students, working adults, children as young as 4 years old, and business managers show similar effects..." So the money priming effect doesn't depend on the population studied. As Neuroskeptic reader Luke Eglington, who brought these papers to my attention, said: if the effect is so fragile, then Vohs, Caruso, and others must have been very lucky, to consistently recruit the right participants. On the other hand, Rohrer et al. say that they don't have any explanation for the positive findings in Caruso et al. The results are unlikely to be due to publication bias, they say. The effects are too strong, and highly unlikely to occur by chance, even taking into account that there were unpublished null results too. Rohrer et al. also reject the idea that methodological differences could account for the failures to replicate. But this leaves us with the question of what is going on here. Hmm.