Sanctuary And The Real Science of Abnormals 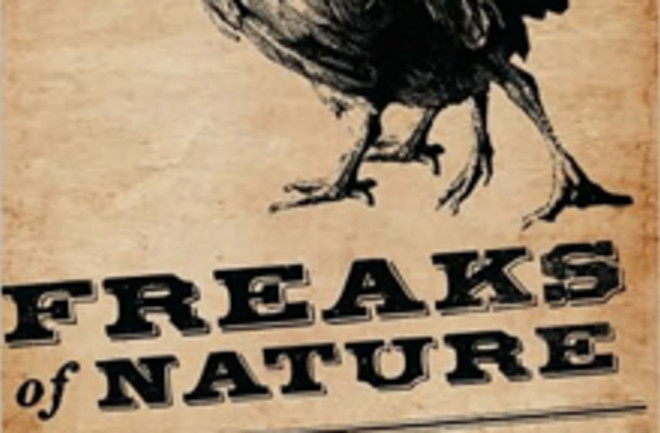 Sanctuary finished up its first 13-episode run last Friday in classic cliffhanger fashion, with humanity on the verge of a war with the mostly hidden population of abnormals. The show had a strong first season (personally, the show had me when it brought on Nikola Tesla as a character. Tesla frequently makes cameos on science fiction shows as some kind of genius who turns out to be a century or two ahead of his time, but making him a vampire on top of everything else was a master stroke.) But turning back to the premiere, and the premise, of the show, there was an early scence where Helen Magnus, the central character of Sanctuary, tries to describe what she does to her bemused soon-to-be-protege Will Zimmerman. She claims to be a student of teratology, which she explains as the science of monsters. Now, in his recently published book Freaks of Nature: What Anomalies Tell Us about Development and Evolution, Mark S. Blumberg takes us on a tour of real-life teratology, and how understanding abnormalities is casting new light on the relationship between the genetic and non-genetic forces that shape us all. Today, as Blumberg describes, teratology as a science has come to mean the study of congenital malformations. (This is somewhat removed from Sanctuary's broad menagerie of many different species, but teratology does have its roots firmly in the fantastic compendiums of monsters and freaks compiled in previous centuries. These contain many bizarre creatures that would be quite at home on the CGI sets of Sanctuary.) In his book, Blumberg argues that the breakthrough discoveries that unravelled the structure and coding of DNA in the 20th century were so dazzling that scientists ultimately became a little too quick to write off studying abnormalities. The thinking was that our bodies were a result of the blueprints laid down in our genes and encoded into our DNA. If a creature was born with an abnormality, without any novel mutation in its genetic code, then the abnormality was simply an error of development, a botched job of turning the plans coded in our DNA into an organism, with little scientific significance. But in recent years the study of epigenetics has altered that thinking. What happens in the cell outside the DNA molecule can be as important, if not more, than anything that is coded into our DNA. What genes get activated and when is determined by a complex set of biochemical networks in our cells, the behavior of which can be modulated by a whole host of external factors, such as the presence or absence of this or that hormone. And thanks to the Human Genome Project and other projects that have sequenced different animal and plant genomes, we know that humans being are not human because our ancestors' DNA mutated over and over to produce lots of really cool human-only genes. Rather, we operate with a collection of genes that is similar to the one possessed by many organisms. The key lies how those genes are expressed, so that the bones of a paw become elongated into fingers or a tail shrinks down to a few vestigial bones stuck on the end of our spines. This is why so many species can look radically different, and occupy different ecological niches (think bats versus kangaroos), and yet be based on the same basic body plan of skull-spine-tail-and-four-limbs. Changing how a gene is regulated is much easier than coming up with a brand new gene. With this new view of how genes are regulated, abnormalities can be seen as much more than mistakes of little significance. Abnormalities indicate what kind of things are easy to change in an organism, and the range of change available to our biological machinery when faced with some evolutionary pressure. For example, if having two heads on one body suddenly conferred a marked advantage, it would be relatively easy to push evolution in that direction, as evidenced by the number of two-headed animals (and, rarely, human beings, such as the engaging Abby and Brittany Hensel twins) that have been born over the years. Hence, studying abnormal development can provide some real insight into how our bodies work and species arise. This view also leads Blumberg to a philosophical position that Helen Magnus would approve of: developmental abnormalities are not failed attempts to express the otherwise perfect plan locked up inside an organism's DNA. If this was true, it would suggest that those organisms are inherently different to 'normal' organisms, those that are apparently following their genetic blueprints faithfully. Life is not that simple, that binary. Instead, abnormalities simply represent points (albeit sometimes extreme points) along a range of natural variation that we all share. Because we all rely on epigenetic factors in our development, there is no singularly perfect plan that lies within our DNA, hence no sharp dividing line between 'normal' and 'abnormal;' we are all bound in the commonality of our existence.