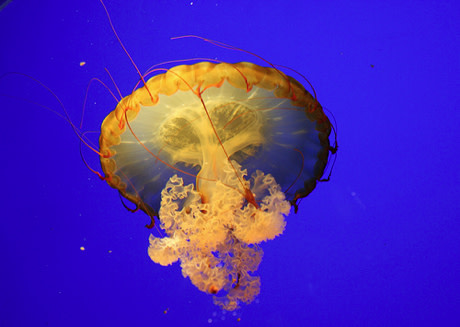 If the oceans eventually become too acidified to sustain most marine life and the jellyfish take over, we can at least take solace in the fact that we'll have an abundant source of renewable energy. GFP (Green Fluorescent Protein), the same protein isolated in Aequorea victoria that earned three researchers the Nobel Prize in chemistry in 2008, has found a new lease of life in solar and fuel cells being developed by Zackary Chiragwandi at the Chalmers University of Technology in Sweden. Much like the dye found in cutting-edge dye-sensitized solar cells, GFP absorbs a specific wavelength of sunlight—in this case, ultraviolet light—to excite electrons that are shuttled off to an aluminum electrode to generate a current. After giving up their energy, the electrons are then returned to the GFP molecules, where they are ready for another round of stimulation (so to speak). The cell's design is simple: two aluminum electrodes are placed onto a thin layer of silicon dioxide, which helps to optimize light capture and energy conversion efficiency, and a single drop of GFP is deposited between them. Without prodding, the protein then self-assembles into strands to connect the electrodes and form a tiny circuit. While cheaper than conventional solar cells, dye-sensitized cells still require some costly materials and are hard to build, making these bio-inspired cells potentially a much more alluring proposition down the line. And because slightly different versions of GFP are found in a number of other marine species, there is the potential for an entire array of more finely tuned GFP cells.Chiragwandi and his colleagues also employed the same basic components to fabricate a rudimentary fuel cell. A mixture of reagents that includes magnesium and luciferase, an enzyme used for bioluminescence, produce the light that activates GFP's electrons and help the device run—no direct sunlight needed. Because of its minuscule size and low power output, the fuel cell might be a good fit for a wide range of medical nanobots that could one day patrol our bloodstreams and treat our illnesses from within. These devices are just the latest in a long line of renewable energy technologies that seek to bring down costs and boost efficiency by capitalizing on Mother Nature's designs. Just a few weeks ago, 80beats' Joe Calamia wrote about an Australian team's discovery of chlorophyll f, a pigment that captures light in the infrared wavelength, in cyanobacteria. Since none of the current solar cells can absorb IR light, which accounts for over half of the sun's rays, some researchers are already giddy at the prospects of harnessing this pigment for use in more efficient cells. In the realm of science fiction, there's also the "human" fuel cell (I almost hesitate to use the term since it inevitably brings to mind The Matrix's silly human batteries) being developed by a group of French scientists which Discovery News reported on several months back. This device would run on a combination of oxygen and glucose—theoretically ad infinitum—and could thus quite easily be implanted in not only humans but a variety of animals as well. Sure, it probably wouldn't have much juice but, like the jelly-fuel cell, it could handily power those nanobots. And if that's all too highfalutin for you, there'll always be the trusty poop-powered mobile. Image: Clicksy/Flickr