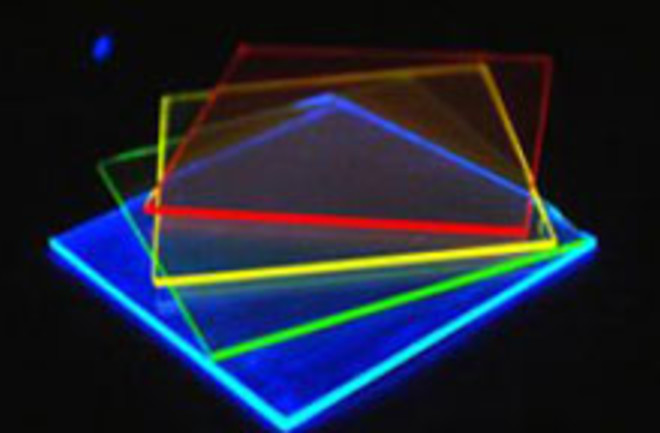 Coating an ordinary sheet of glass with dye could be the key to cheaper, more efficient solar panels, according to a new study. Researchers say the dye absorbs visible light and transmits it to the edges of the glass sheet, where strips of photovoltaic cells convert the light into electricity. Current solar panels are made entirely of the expensive photovoltaic cells.

The team, from the Massachusetts Institute of Technology (MIT), claims the technology could slash the cost of generating electricity from sunlight, making it more competitive with standard grid power [The Guardian]. Although this technique is highly experimental, researchers say that eventually the

collectors might double as windows... or could be used in place of standard solar panels [New Scientist].

Researchers explain that the dyed glass absorbs light and traps it inside the glass pane.

With the help of a scientific principal called "internal refraction," which is the same principal that keeps light trapped in optical fibers, the light bounces to the edges of the glass [GreenTech Media], which is where the photovoltaic cells take over.

The new invention, which is described in the journal Science, offers a contrasting approach to the other big idea in solar power: Solar concentrators that use mirrors to concentrate the sun's rays onto a panel. Concentrators

can generate a lot of power, but rely on expensive sun-tracking mirrors [Wired News], and aren't yet feasible in a residential setting.

thinks that the [dyed-window] system will be easy to commercialize. "It looks very practical to make," he says [Nature News]

, while other members of his team added that the technology could reach the market within three years. However, the MIT team has formed a company, Covalent Solar, to develop the technology, so their opinions may not be entirely objective. Image: Donna Coveney, MIT