3 Ideas That Are Pushing the Edge of Science 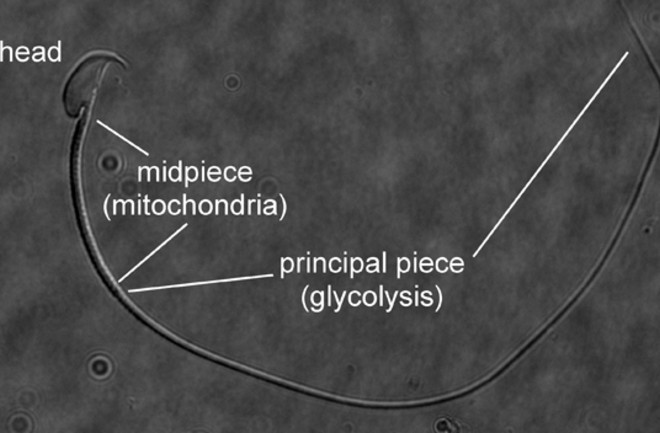 1 Sperm-powered Nanobots The next wave in health care may include a brigade of medical nanobots, devices tiny enough to ride the flow of blood through the body's arteries to a problem area. The bots might arrive at a clot, for example, and then using an internal power system, obliterate the clot with a precisely targeted drug or therapy. Designing a power source to accomplish such a task has been a challenge, but from the College of Veterinary Medicine at Cornell University comes a possible answer. The same molecular power packs that fuel sperm in their journey through the uterus and to a fallopian tube might be copied and used to keep the nanomachines running once they reach their targets.

Led by reproductive biologist Alex Travis, the engineering effort focuses on a chain of enzymes that metabolize glucose molecules into the biological fuel ATP (a process known as glycolysis), which enables sperm locomotion. Ordinarily the ATP provides sperm with enough energy to bend and flex their tails as they swim to the unfertilized egg. Travis’s plan is to copy the design of the sperm’s engine by slightly modifying a 10-enzyme glycolysis chain embedded in the sperm’s tail, and then to install it in nanobots.

Using mouse sperm, Travis has thus far modified the first two enzymes on the chain so that they bind to nickel ions attached to the surface of a tiny gold chip, which serves as a stand-in for a future nanobot. Now he needs to tweak the remaining enzymes so they can be attached too. If the spermlike motor works, it could someday use the body’s own energy source—glucose—to do such things as run super-tiny medical devices designed to release anticancer drugs or trigger the breakup of potentially deadly clots.

2 Fusion On Tap Plasma physicist Eric Lerner has a dream: a form of nuclear energy so clean it generates no radioactive waste, so safe it can be located in the heart of a city, and so inexpensive it provides virtually unlimited power for the dirt-cheap price of $60 per kilowatt—far below the $1,000-per-kilowatt cost of electricity from natural gas.

It may sound too good to be true, but the technology, called focus fusion, is based on real physics experiments. Focus fusion is initiated when a pulse of electricity is discharged through a hydrogen-boron gas across two nesting cylindrical electrodes, transforming the gas into a thin sheath of hot, electrically conducting plasma. This sheath travels to the end of the inner electrode, where the magnetic fields produced by the currents pinch and twist the plasma into a tiny, dense ball. As the magnetic fields start to decay, they cause a beam of electrons to flow in one direction and a beam of positive ions (atoms that have lost electrons) to flow in the opposite direction. The electron beam heats the plasma ball, igniting fusion reactions between the hydrogen and boron; these reactions pump more heat and charged particles into the plasma. The energy in the ion beam can be directly converted to electricity—no need for conventional turbines and generators. Part of this electricity powers the next pulse, and the rest is net output.

A focus fusion reactor could be built for just $300,000, says Lerner, president of Lawrenceville Plasma Physics in New Jersey. But huge technical hurdles remain. These include increasing the density of the plasma so the fusion reaction will be more intense. (Conventional fusion experiments do not come close to the temperatures and densities needed for efficient hydrogen-boron fusion.) Still, the payoff could be huge: While mainstream fusion research programs are still decades from fruition, Lerner claims he requires just $750,000 in funding and two years of work to prove his process generates more energy than it consumes. “The next experiment is aimed at achieving higher density, higher magnetic field, and higher efficiency,” he says. “We believe it will succeed.”

3 A Two-Timing Universe For nearly a century, physicists have tried to reconcile Einstein’s vision of the universe (including three dimensions of space and one of time) with the bizarre realm of quantum physics, rife with such oddities as instant communication at a distance and being in two places at once. The effort to unify the views has resulted in a stream of elaborate hypotheses positing worlds with multiple dimensions of space, most notably string theory and its successor, M-theory.

Itzhak Bars, a theoretical physicist at the University of Southern California, thinks these hypotheses are missing a crucial ingredient: an extra dimension of time. By adding a second dimension of time and a fourth dimension of space to Einstein’s standard space-time, Bars has come up with a new model providing “additional information that remained hidden in previous formulations” of physics, including current versions of M-theory. Such a model could better explain “how nature works,” he says.

Physicists had never added a second dimension of time to their models because it opens the possibility of traveling back in time and introduces negative probabilities and other scenarios that seem nonsensical. In his equations Bars has solved these problems with a new symmetry that treats an object’s position and its momentum as interchangeable at any given instant.

Does this mean we could actually experience a second dimension of time? “Yes,” Bars says, “but only indirectly,” by thinking of the world around us as many shadows that look different depending on the perspective of the light source. “The predicted relations among the different shadows contain most of the information about the extra dimensions,” he explains. Next, Bars and his team are developing tests for two-time physics and investigating how to apply the theory to all the natural forces, including gravity. Adding two-time physics to M-theory, he says, should help us close in on “the fundamental theory that so far has eluded all of us.”