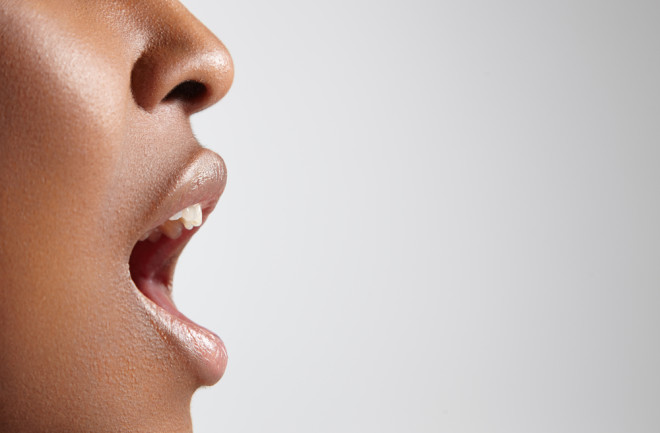 The researchers, Tim M. Tierney et al. of University College London, built the device in order to record activity in the hippocampus, an area deep in the brain.

Because of the hippocampus's deep location, it is difficult to record its activity using methods such as electroencephalography (EEG) or magnetoencephalography (MEG), which record at the scalp.

Tierney et al. realized that the magnetic fields produced by hippocampal activity should be strong inside the mouth. The only problem was getting an MEG sensor in there and keeping it in a stable position. They came up with the idea of attaching a the sensor (called an OPM) to a custom-fitted plastic dental mould. The mould was created to fit the teeth of a volunteer, allowing him to bite down on it, holding it inside his mouth:

Tierney et al. say that it would have been better to place the sensor even closer to the hippocampus, but "A limitation on how far into the mouth the appliance can be placed is imposed by the need to avoid activating the gag reflex".

The sensor worked — it was able to detect the increase in hippocampal theta activity when the volunteer was asked to imagine being in different locations, a task that is known to involve the hippocampus.

The mouth sensor picked up the hippocampal activity better than sensors on the scalp. However, whether the advantages of the mouth electrode outweigh the inconvenience of having to custom-fit the device to each participant remains to be seen.