More Doubts Over The Oxytocin And Trust Theory

The claim that the hormone oxytocin promotes trust in humans has drawn a lot of attention. But today, a group of researchers reported that they've been unable to reproduce their own findings concerning that effect. The new paper, in PLoS ONE, is by Anthony Lane and colleagues from Louvain in Belgium. The same team have previously published evidence supporting the link between oxytocin and trust. Back in 2010 they reported that "oxytocin increases trust when confidential information is in the balance". An intranasal spray of oxytocin made volunteers more likely to leave a sensitive personal document lying around in an open envelope, rather than sealing it up, suggesting that they trusted people not to peek at it. However, the authors now say that they failed to replicate the 2010 'envelope task' result in two subsequent studies. Here's the key data. The original 2010 results are at the top, the two replications are below. The bars show the proportion of participants who left the envelope sealed and taped (least trusting), sealed only, or open (most trusting). 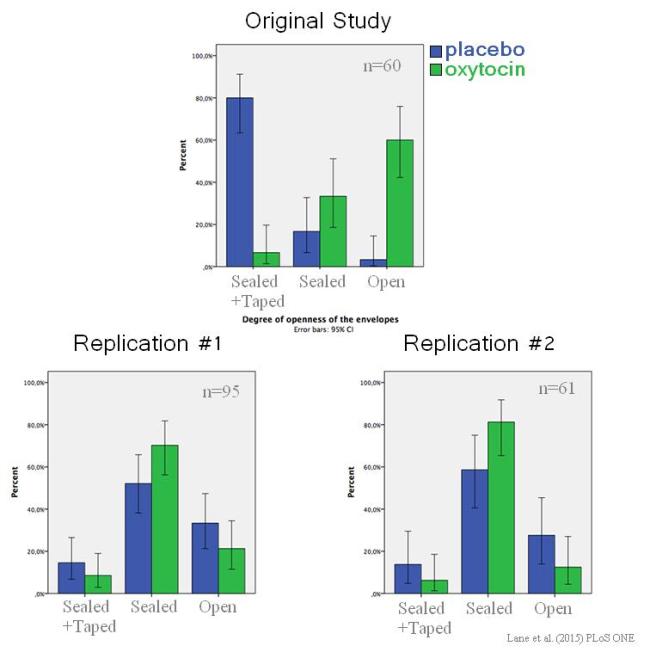 Participants given oxytocin (green) were much more trusting in the original study compared to those on placebo (blue). However in the replications, this effect was absent. Lane et al. conclude that

The non-significant results of these two failed replications clearly exclude a large effect of oxytocin on trust in this paradigm... Taken together, our results question the purported size of oxytocin’s effect on trust and emphasize the need for replications.

But then, why did the original study find such a large effect? Lane et al. point out that it's extremely unlikely that the original effect was just a fluke: the effect size in the 2010 study was enormous, and the effect was highly significant at p<0.001. Instead, the authors suggest that the effect may have been driven by 'unconscious behavioral priming'. The 2010 study was only single-blind - the participant didn't know whether they were getting oxytocin or placebo but the experimenter did know. The researchers might have behaved differently towards the participants based on that knowledge. Plausibly, this could have made the participants feel more or less comfortable. The replications were double-blind and so were immune to this bias. So maybe that was the problem all along. There's one odd feature of the data, however: in the replications, people on placebo were much more trusting than in the original study. In the original, almost everyone in the placebo group sealed and taped the envelope, but in both of the replications, hardly anyone did that. This difference is unexplained, and Lane et al. don't discuss it. Die-hard oxytocin-trust believers might complain that the null results are ceiling effects although I don't think this is the case because there is still plenty of "room" for oxytocin to increase trust. Either way, we should applaud Lane and colleagues for being willing to question their own results - and for being brave enough to run a direct replication of their own results in the first place (and so face the risk of 'failure').