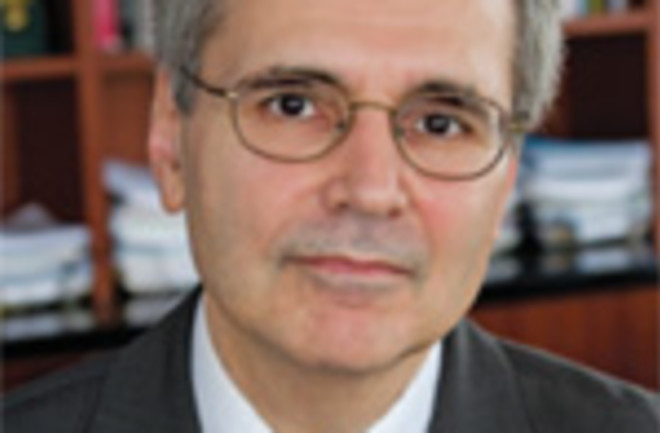 Ronald A. DePinho. courtesy University of Texas M.D. Anderson Cancer Center At the annual meeting of the American Association for Cancer Research, which begins tomorrow in Washington D.C., what you notice right away is how every PowerPoint presentation starts with an obligatory conflict-of-interest disclosure slide. Many university researchers, including Nobel prizewinners, consult for pharmaceutical corporations and some even have their own startups. If they can develop a new targeted cancer treatment that staves off death a few months longer, their company might be snapped up by Genentech. The financial stakes are as high as anything happening in Silicon Valley. At an AACR meeting I sat through a couple of years ago, the disclosure requirement often met with resentment, and in The Cancer Chronicles (which will go to press this summer) I describe how some of the speakers expressed their displeasure. A few proudly declared, to a round of applause, that they had no conflicts. They were scientists not businessmen. Others recited their disclosures so quickly that you could barely catch a word. I was reminded of television car commercials where the announcer, in a chipmunk voice, speeds through the warranty disclaimers. Some took a loftier approach. In the opening plenary session, a prominent researcher who was then at Dana-Farber simply said that she had lost her slide and then proceeded with a fascinating presentation on sequencing the cancer genome. Her name was Lynda Chin, and I had all but forgotten the incident until a controversy arose last year over an $18 million grant. By this time her husband and business partner, Ronald DePinho, had become president of the M.D. Anderson Cancer Treatment Center, and he had come under suspicion after the speedy approval of the grant to a group led by Dr. Chin. The money was awarded by the Cancer Prevention and Research Institute of Texas, whose chief scientific officer resigned in protest. Since then a number of other prominent scientists have followed him out the door complaining that the integrity of the grant process has been undermined by favoritism, politics, and commercialization. In my previous post, I wrote about an internal survey, leaked to The Cancer Letter, about morale problems at Anderson.

When the issue over the grant first arose, husband and wife defended themselves in an interview with Nature. A day later Dr. DePinho was at the center of another controversy following reports that he had enthusiastically described the couple’s company, Aveo Oncology, on a CNBC stock market show called “Closing Bell with Maria Bartiromo.” When confronted, Dr. DePinho apologized: “I am a public official in a position of trust, and I should never comment on any of my personal holdings or give investment advice . . . It was a mistake for me to do so on the CNBC interview.” Aveo has an impressive board of scientific advisors, which includes some of the field's most prominent researchers: Lewis Cantley of Beth Israel Deaconess Medical Center, Douglas Hanahan of the University of California San Francisco, Tyler Jacks of the Koch Institute at M.I.T., and Charles Sawyers of the Memorial Sloan Kettering Cancer Center. Dr. Jacks is a former president of AACR and Dr. Sawyers will assume that position at this week's meeting. In recent months Aveo’s stock has not done so well. Trading before the CNBC show at about $11 a share, it has dropped since then to $7.25. (It has traded in the past for as high as $20.) According to The Cancer Letter, Dr. DePinho and his family trust hold nearly 600,000 shares, which still comes to more than $4 million. When my wife (now former wife) was diagnosed years ago with a Stage 4 metastatic cancer, we made the customary pilgrimage to M.D. Anderson. It is an impressive place with some of the best doctors and scientists in the world. Many are tireless in their dedication to seek better treatments. What hadn’t occurred to us, however, was just how much money a few of them stand to make. (This post was adapted and updated from one I wrote for my old blog, The Cancer Chronicles.)Related Posts:The Trouble at M.D. AndersonOn Dwarves, James Watson, and the Oddities of Cancer