Science on psychedelic fungi is thawing after decades of prohibition. Here’s what we know so far. 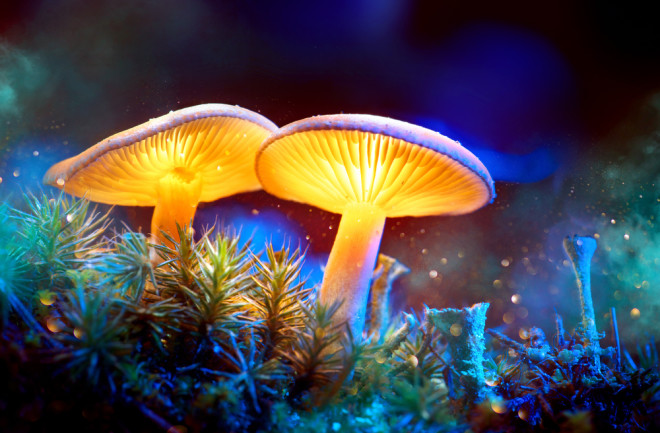 They’ve been credited in part for the musical and artistic revolutions of the late 1960s. According to some scientific opinions, they have potentially inspired early creativity in humans and our ancient ancestors. Researchers have seen them pop up in the art of Maya, Mixtec and other cultures throughout ancient America and even in parts of the Old World, where they may have been used both spiritually and medicinally.

So-called “magic” mushrooms have been a source of both reverence and controversy, thanks to the psychotropic and hallucinogenic effects they cause when ingested. As a result of the controversy, though, the United States made these types of mushrooms illegal in 1970, and a number of other countries around the world followed suit. Due to the ban, few other natural substances known to carry such strong sensory and emotional effects are as poorly studied by scientists.

But a recent relaxing of this decades-old hardline stance has resulted in a flurry of new research that seeks to understand more about the evolution of these drugs, their ecology and their potential medical and therapeutic use. “Right now we are at the stage where we can ask the questions again,” says Tom Froese, an assistant professor of cognitive science at the Okinawa Institute of Science and Technology in Japan.

While most recreational mushroom use revolves around one species, Psilocybe cubensis, there are hundreds known in the Psilocybe genus, asserts Britt Bunyard, a mycologist and publisher of the magazine FUNGI. Nearly all of them contain the psychedelic compounds psilocybin, psilocin and baeocystin. These species are found on every continent other than Antarctica, and Froese says that new species are getting discovered all the time. The widespread distribution of the genus led Gaston Guzman, a Mexican mycologist and anthropologist (who studied magic mushrooms with Froese before his death in 2016) to hypothesize that they are likely old enough to have existed before Earth’s continents split up about 300 million years ago.

The mushrooms themselves convert tryptophan, an amino acid, into organic psychedelic compounds like psilocin. These compounds interact with serotonin receptors in the human brain, producing sensations of pleasure and hallucinations, says Nate Daniels, an assistant professor in pharmaceutical sciences at Lipscomb University in Tennessee.

Thanks to their trippy effects, mushrooms became an important part of many ancient cultures. Numerous references to the power of ‘shrooms have been found in ceramics and artwork from a number of indigenous cultures in the Americas, such as the Aztec and Maya. Representations outside of the Americas were relatively scarce in antiquity. But Froese and his colleagues found a number of possible Old World depictions. These range from the six-millennia-old Spanish mural Selva Pascuala, which depicts a bull and some mushrooms that appear similar to a psilocybe species, to paintings showing human-type characters holding mushrooms in rock art at Tassili n’Ajjer, a World Heritage site in the Sahara Desert in Algeria.

Some scholars have long argued that a focus on geometry-based artwork, or even the depiction of alternate realities, may have been inspired by magic mushroom experiences, or those of other psychedelic drugs, but this has thus far been difficult to prove.

The question of why some mushrooms evolved to carry mind-bending compounds has no clear answer either. Some mushrooms are known to affect the brains of creatures in certain ways, including the zombifying abilities of many cordyceps fungi, which take control of the arthropods they infect to propagate their spores and latch onto new hosts. Meanwhile, aside from the Psilocybe genus, other types of fungi also carry psychedelic compounds, which indicates they must have evolved several times independently, Froese says.

One example is the Massospora, which infects cicadas and treats them to a less-than-trippy experience by obliterating their genitals, abdomens and bottoms. These fungi also contain psilocybin, which may prompt males to flick their wings like females. When other fooled males try to mate with them, the fungus is passed along. Bunyard says the development of the psychedelic compounds might have been a relic of something in the past, and that they may not have an ecological purpose today.

Bunyard also says that it’s unlikely that the psychedelic compounds evolved to produce a toxic effect, particularly as these mushrooms aren’t accompanied by any sort of off-putting flavors that would warn organisms not to eat them. In fact, it’s a common misconception that psilocybes can be poisonous to humans. “You could eat tons of them and get sick due to all the fiber, but they’re not toxic,” Bunyard says.

Still, he doesn’t recommend going out searching for these things in the wild. “Since there are many poisonous lookalikes, it’s not really wise,” Bunyard says. Even trained mycologists have difficulty differentiating generic-looking psilocybes from other mushrooms, some of which can be genuinely dangerous to consume, such as the deadly Conocybe filaris. Bunyard notes that some 30 percent of the annual poisonings recorded every year by the North American Mycological Association cite psychedelic mushrooms. But a deeper examination of these records reveals that trip-hunting foragers likely misidentified more common poisonous fungi as relatively rare psilocybes.

While the banning of magic mushrooms had a chilling effect on scientific research into potential therapeutic or medicinal uses, “things are changing for so many different drugs that used to have bad stigmas attached to them,” Daniels says.

In 2018, he and his colleagues conducted a review of all scientific studies of magic mushrooms. They found that the active components of the mushrooms showed great promise in the treatment of numerous disorders. “It was a little hard to write completely objectively because some of the clinical data we were seeing was so positive and so impressive,” he says.

The research they reviewed indicated that magic mushrooms could alleviate long-term depression and anxiety in some patients, effects that lasted at least six months after a dosing. This may partly be due to the way that the drug changes sleep patterns, according to research by Froese and others. The chemicals in the mushrooms also showed success in treating alcohol or tobacco addiction, while few signs pointed to the potential for psilocybes themselves to be addictive.

“We don’t see the abuse potential like we would with a lot of other drugs because you basically have this downturn where the [serotonin] receptors are not nearly as receptive to another dose,” Daniels says, adding that it takes a number of weeks to receive the same effect. “It might actually be a very valuable tool in the war against drugs, by allowing people to reconfigure their habits.”

Despite positive signs, Daniels notes that a stigma still surrounds mushrooms due to the policies of the last few decades. “There’s stigma around the people who take it, there are stigmas around the reasons people may take them.” He says more research is definitely needed on the potential medicinal or therapeutic uses of magic mushrooms.

Froese agrees. “There’s some tantalizing evidence coming in about these benefits but it’s still too early to draw some strong conclusions,” he says.