It isn't yet clear how excessive technology use affects the brain, but researchers think frequent stimulation and immediate gratification could impact focus on more laborious tasks. 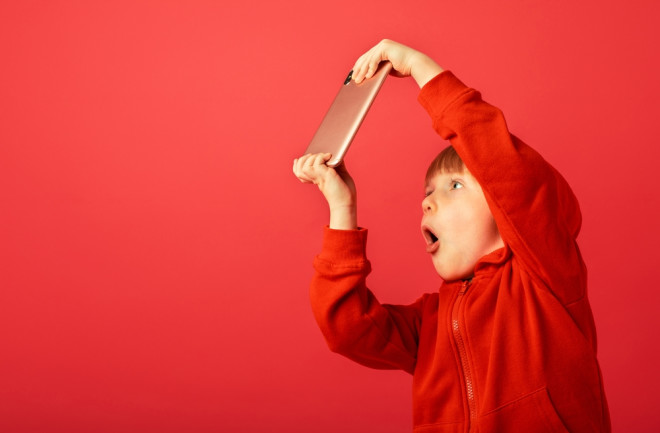 As a working mom to a 1- and 6-year-old, keeping screen time in check during the early stages of the pandemic could feel futile. My older child’s kindergarten class was entirely virtual, and after the school day his sole cartoon viewing multiplied as I struggled to get my work done. My husband and I also found ourselves addicted to our screens. After entire days spent on our laptops, we would unwind in the evenings by watching endless episodes of House Hunters International while scrolling through social media. We were all in survival mode, disregarding the possibility of long-term damage.

Luckily, things have improved this year. My son is back in school and playing sports. My toddler hits the playground frequently again and spends ample hours causing a media-free raucous at grandma’s house. Screens are still a crutch but we’re doing our best to get things back in check: spending less time on tablets, skipping TV, and trimming our time on Instagram and Twitter. We’re doing the best we can because we assume, on a broader level, that too much screen gazing isn’t good for our children’s development — or for our adult brains.

But what does the research really say? Do the brief TikTok clips and the flashy video games we’ve grown to love make it impossible for our brains to focus? And does the immediate reward of “likes” on social media and the seemingly endless supply of mind-numbing reality TV make it harder to process trickier tasks? According to experts, there’s growing cause for concern.

Kids aged 5 or younger who experience two or more hours of daily screen time are nearly eight times more likely to be diagnosed with focus-related conditions including attention deficit hyperactivity disorder (ADHD), says Michael Manos, director of the ADHD Center for Evaluation and Treatment at the Cleveland Clinic.

That’s because these devices likely impact the brain, he explains. Electronics allow for repeated stimulation and immediate gratification every few seconds. And when we become accustomed to such rapid and frequent stimulation, it can be hard to focus when things in the real world aren’t as mesmerizing. “Screen time makes the regular world seem rather dull, like watching a plant grow,” says Manos.

This is largely due to the fact that the brain operates with two kinds of attention: automatic and directed. Automatic attention is associated with the brain’s default mode network, Manos explains. We typically use it when interacting with something that’s easily engaging, such as social media, video games and television. Directed attention is associated with the task-positive network, which we utilize when we’re concentrating on tedious (and sometimes boring) tasks like studying, reading a book and folding laundry. Activities that are more laborious require significant directed attention, Manos says.

“When a child spends too much time on screens being constantly rewarded, it can become hard to exercise directed attention doing the tasks that aren’t as fun but are necessary in life,” he says.

Research can’t yet indicate how a highly digital generation will be affected as adults because this level of screen time is historically unprecedented. But it does suggest that young people are more likely to be diagnosed with ADHD: Overall instances of ADHD are up 4 percent from two decades ago, according to a 2018 JAMA Network Open study. That’s a worrying increase, according to experts. But we don’t know if heightened screen time actually causes ADHD, or if it’s simply a correlation.

Does Screen Time Change Our Brains?

Beyond altering one’s ability to focus on tedious tasks, spending too many hours with technology changes the brain in a number of ways that we’re just beginning to understand, says John Hutton, a clinical researcher and director of the Reading & Literacy Discovery Center at Cincinnati Children’s Hospital.

A 2019 article published in JAMA Pediatrics concluded that preschoolers who spent relatively high amounts of time on screens had less white matter integrity in the brain. White matter is interior neural tissue that’s associated with learning ability and is thought to coordinate communication with other portions of the brain.

Hutton has also investigated technology-based learning. His research analyzed brain images sourced from children reading animated stories on screens versus traditional picture books. “We found that in children who read animated books, brain scans showed a huge drop-off in the language networks of the brain while the visual portions were hyper focused,” Hutton says.

This work showed that hyper-engagement of the visual networks can come at the expense of internally generated imagination, Hutton says. For example, traditional story books prompt children to look at the picture as they hear a few accompanying words — these steps allow their imagination to fill the gaps. But this isn’t the case with screen-based animated stories. And we’re learning that when these portions of the brain aren’t sufficiently utilized they may not develop appropriately into adulthood, he adds.

While it isn’t clear what this means for both children and adults who spend an inordinate amount of time in the digital world, the concern is that the brain hasn’t evolved to handle an onslaught of visual cues and immediate gratification. Perhaps as a result, research has shown that adults who devote more than six hours daily to screens are also significantly more likely to suffer from depression.

Screen time, Hutton says, is a “complicated beast” that comes with plenty of positives such as access to wide troves of information and various opportunities for social connection. But growing brains need other kinds of engagement, like rolling in the muck and playing with blocks. Adults’ mental health can also benefit from playing outside. “We really need both for our kids and for us to thrive,” he says

More From Discover
Mind
The Long-Term Psychological Impact of School Shootings
Mind
The Controversial Condition of Sensory Processing Disorder
Planet Earth
Do Cats Have Dreams?
Mind
Your Navigation Skills Depend on Where You Grew Up
Mind
Research Reveals Surprising Conversations Between Our Brain Cells
Health
Past Lead Exposure Shrank IQ Scores for Millions of Americans
Recommendations From Our Store
My Science ShopDiscover STEM Kits
My Science ShopDiscover 2022 Calendar
My Science ShopStrange Science
My Science ShopElements Flashcards
Shop Now
Stay Curious
Join
Our List