How Can We Measure Human Oxytocin Levels?

Is oxytocin really the love and trust chemical? Or is it just the hype hormone? A new paper suggests that many studies of the relationship between oxytocin and behaviors such as trust have been flawed. 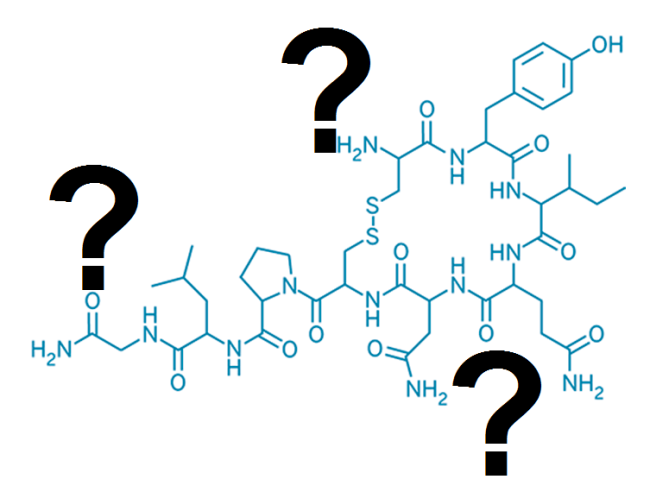 The paper is a meta-analysis just published by Norwegian researchers Mathias Valstad and colleagues. Valstad et al. found that the level of oxytocin in human blood, often used as a proxy measure of brain oxytocin, has no relation to central nervous system oxytocin levels under normal conditions.

Valstad et al. combined the results of 7 studies that compared plasma oxytocin against central oxytocin in humans. Central oxytocin was in most cases measured in the cerebrospinal fluid (CSF) via spinal tap . The headline result was that there is no evidence of a correlation between plasma and central oxytocin at baseline in humans (r = 0.05, p = .59).

By contrast, following treatments which increased oxytocin levels, such as intranasal oxytocin, blood plasma was a positive predictor of central oxytocin. This suggests that plasma might be a useful tool for assessing the impact of a treatment on oxytocin, but not for studying the hormone in the baseline state.

This graph shows the key result: the average correlation was no different from zero in the baseline condition (note that some of the studies included in this analysis were in animals): 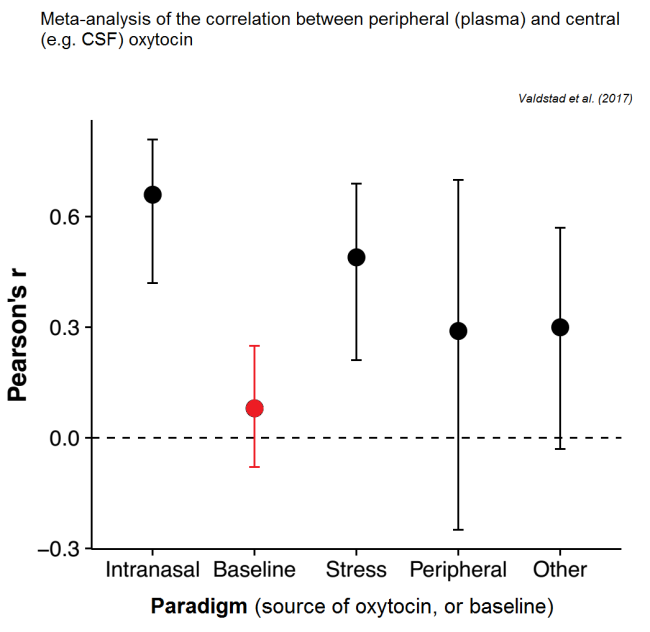 Valstad et al. conclude that “blood plasma may not efficiently index central oxytocin concentrations under baseline conditions.” This, they note, is a problem for the many studies which have looked for behavioral correlates of baseline plasma oxytocin:

There is a substantial body of research attempting to link peripheral oxytocin concentrations with psychological phenotypes or psychiatric disorder status. Since the social-cognitive effects of oxytocin have been assumed to arise from oxytocin action in the CNS, the assumption that peripheral and central oxytocin concentrations correlate in a baseline condition was crucial in the interpretation of the results from these two approaches… This assumption is called into question by the present data.

In fact, it gets even even worse. Some studies (e.g.) have reported psychological correlates of urinary oxytocin. In the light of Valstad et al.’s results, this seems highly implausible, because oxytocin enters urine from the blood, so urinary oxytocin is a (poor) proxy of blood oxytocin, let alone of central oxytocin.

Note that this study doesn’t call into question all oxytocin-behavior studies. For example, experiments looking at the effect of an intranasal dose of oxytocin on behavior are not directly affected, although in my opinion there is still much doubt as to whether intranasal oxytocin actually enters the human brain in sufficient quantities to have a meaningful effect.