fMRI Gets Slap in the Face with a Dead Fish

A reader drew my attention to this gem from Craig Bennett, who blogs at prefrontal.org: 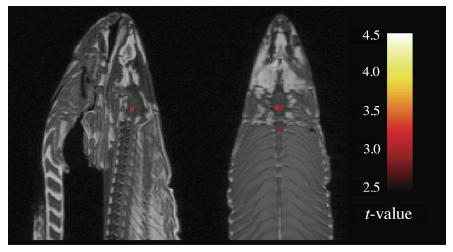 This is a poster presented by Bennett and colleagues at this year’s Human Brain Mapping conference. It’s about fMRI scanning on a dead fish, specifically a salmon. They put the salmon in an MRI scanner and “the salmon was shown a series of photographs depicting human individuals in social situations. The salmon was asked to determine what emotion the individual in the photo must have been experiencing.”

I’d say that this research was justified on comedic grounds alone, but they were also making an important scientific point. The (fish-)bone of contention here is multiple comparisons correction. The “multiple comparisons problem” is simply the fact that if you do a lot of different statistical tests, some of them will, just by chance, give interesting results.

In fMRI, the problem is particularly severe. An MRI scan divides the brain up into cubic units called voxels. There are over 40,000 in a typical scan. Most fMRI analysis treats every voxel independently, and tests to see if each voxel is “activated” by a certain stimulus or task. So that’s at least 40,000 separate comparisons going on – potentially many more, depending upon the details of the experiment.

Luckily, during the 1990s, fMRI pioneers developed techniques for dealing with the problem: multiple comparisons correction. The most popular method uses Gaussian Random Field Theory to calculate the probability of falsely “finding” activated areas just by chance, and to keep this acceptably low (details), although there are other alternatives.

But not everyone uses multiple comparisons correction. This is where the fish comes in – Bennett et al show that if you don’t use it, you can find “neural activation” even in the tiny brain of dead fish. Of course, with the appropriate correction, you don’t. There’s nothing original about this, except the colourful nature of the example – but many fMRI publications still report “uncorrected” results (here’s just the last one I read).

Bennett concludes that “the vast majority of fMRI studies should be utilizing multiple comparisons correction as standard practice”. But he says on his blog that he’s encountered some difficulty getting the results published as a paper, because not everyone agrees. Some say that multiple comparisons correction is too conservative, and could lead to genuine activations being overlooked – throwing the baby salmon out with the bathwater, as it were. This is a legitimate point, but as Bennett says, in this case we should report both corrected and uncorrected results, to make it clear to the readers what is going on.