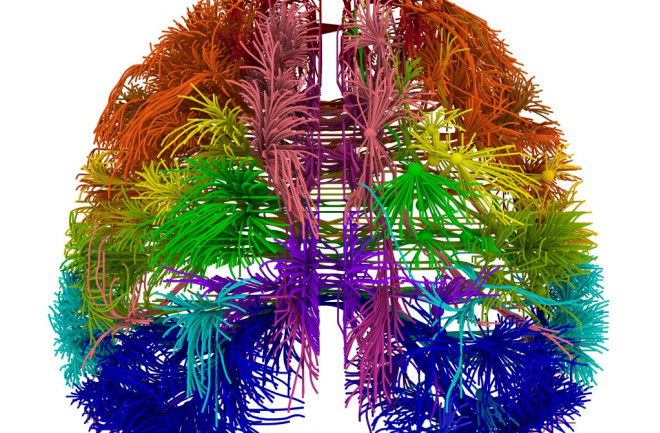 A top-down 3-D view of the mouse connectome. Credit: Allen Institute for Brain Science The brain is an incredibly complex organ. The tiny mouse brain, for example, contains over 86 million neurons, each with over 1,000 different connections, clustered in different groupings. In a sense, the neural networks resemble a complex highway system between cities. To navigate the brain, researchers are going to need some maps, and two of the most detailed maps have just been created. Scientists from the Allen Institute for Brain Science in Seattle pored through massive data sets to build two new maps: one of gene expression in the developing human brain, and another of neural networks in a mouse brain. The maps, which are publicly available, will serve as resources for researchers around the world. Already, the data are revealing valuable insights about formation of autism and the way mammalian brains process information. Scientists shared their findings in two separate papers published today in the journal Nature.

Connections between four distinct visual areas in the mouse cortex (green, yellow, red, orange) are visualized in 3-D. These areas are highly interconnected with each other and with additional areas involved in vision in the thalamus (pink) and midbrain (purple). Credit: Allen Institute In the first study, scientists created a wiring diagram — known as a connectome — of a mouse brain. The result is the first detailed map of any mammal's neural network. To do this, researchers injected genetically engineered tracer viruses to illuminate neuronal pathways in more than 1,700 mouse brains. They then imaged the organs at resolutions smaller than a micrometer — 50 times smaller than the diameter of a human hair — and assembled the data into a 3-D map of connections. In total, researchers collected 1.8 petabytes of data — the equivalent of almost 24 years of continuous high-definition video. Hongkui Zeng and colleagues used the data to demonstrate the highly specific connection patterns. For example, the mouse brain features a large number of weak connections and a small number of very strong connections. “This tells us that the brain integrates information in a very specific, quantitative way,” Zeng said. “Are these strong and weak connections balancing each other out? Does this enhance the computational power of the brain? This is a very intriguing observation.”

Next Step for Mapping

Zeng said they plan to dig deeper into the data to map the smaller “streets” from region to region. She would also like to compare the wiring maps of healthy mice and diseased mice to determine if neurological disorders alter the connectome. Although the atlas is a powerful resource, it’s only the beginning. The map only shows the structure of connections, but it doesn’t allow us to see those connections functioning. “The map sets the foundation for future work, but we have a long way to go,” Zeng said. “It’s mainly because it’s a static roadmap. It’s not enough to just have a roadmap, because you also want to observe traffic patterns.”

A second study, also published today, represents the most detailed map ever made of the fetal human brain. Researchers used laser micro-dissection to slice and stain segments of four prenatal, developing human brains. This technique highlighted which genes were active in each section, which the researchers then assembled into a high-resolution blueprint of how genes are turned on and off while the brain develops. Then, they set their sights on autism, a disease known to have links with early brain development. “We took a set of genes that could be linked with autism and asked if they have a particular pattern in the developing cortex, and the answer was yes,” said Ed Lein, lead investigator at the Allen Institute. “This is one more piece of evidence that the root of autism is likely to be prenatal.” They discovered the genes tied to autism were associated with newly generated neurons in the cortex.