Emodiversity: A Mix of Emotions Is Healthiest?

"Emodiversity" - a life containing a balance of different emotions - is good for you. So say psychologists Jordi Quoidbach and colleagues in a rather cool new paper (pdf). 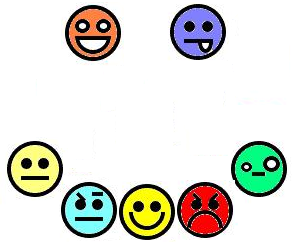 In two large surveys (with a total of over 37,000 responders), conducted in France and Belgium, Quoidbach et al. show that

emodiversity is an independent predictor of mental and physical health – such as decreased depression and doctor’s visits – over and above mean levels of positive and negative emotion.

They defined emodiversity as follows: the survey asked participants to rate how often they experienced each of 9 positive and 9 negative emotions (or 10 in the second study). Each emotion was rated on a 5 point scale of 0 = never and 4 = most of the time. Emodiversity was calculated using this formula

[just as] biodiversity increases resilience to negative events because a single predator cannot wipe out an entire ecosystem, emodiversity may prevent specific emotions – in particular detrimental ones such as acute stress, anger or sadness – from dominating the emotional ecosystem. For instance, the experience of prolonged sadness might lead to depression but the joint experience of sadness and anger – although unpleasant – might prevent individuals from completely withdrawing from their environment. The same biodiversity analogy could be applied to positive emotion. Humans are notoriously quick to adapt to repeated exposure to a given positive emotional experience; positive experiences that are diverse may be more resistant to such extinction.

This makes sense - though it assumes that emodiversity is the cause of being healthy and not depressed. As this study was cross-sectional and correlational, it can't tell us that. It might be that one of the effects of depression (say) is a reduced range of emotions. Quoidbach et al. do note this possibility, but they clearly favor the idea that emodiversity is the cause of well-being, even claiming in the abstract to have shown "the benefits of emodiversity" which sounds rather like the (sub)title of an upmarket self-help book. Still, there's no denying that this is a huge study and that the correlation - an interesting one - is real enough.