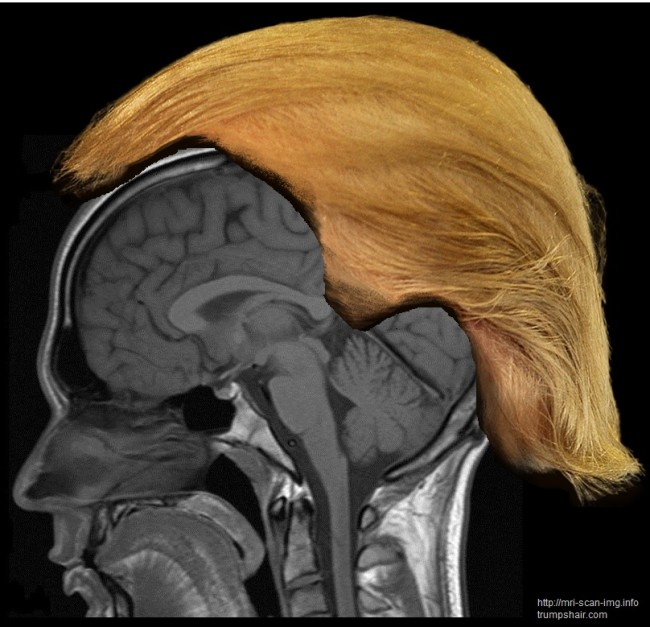 The past year has seen the emergence of a new field of neuroscience: neuroTrumpology. Also known as Trumphrenology, this discipline seeks to diagnose and explain the behaviour of Donald Trump and his supporters through reference to the brain. Here are some examples of neuroTrump scholarship: Donald Trump's Lizard Brain (February 2016) and After a brain injury, I suddenly displayed some behavior similar to Donald Trump’s (August 2016). More recently we have Trump’s Lies vs. Your Brain (January 2017) and

(February 2017). Trump neuroscience goes hand in hand with another thriving field, namely Trump psychiatry. According to various experts, Donald Trump could be diagnosed with mental disorders ranging from narcissitic personality disorder and psychopathy to ADHD. Here's why I think all of these attempts to explain Trump's behaviour with neurological or psychological abnormalities are wrong. The basic problem is circularity: the observed facts of Trump's behaviour are what motivate us to seek some kind of label as an explanation, but the only evidence for the explanation is the same observed facts that we started off with. In other words, in saying that Trump is "a psychopath" or "dominated by his amygdala", we seem to be explaining or at least shedding light on his behaviour, but all we're actually doing is circling back to where we started. For example, you might believe that the President is a rash person who tends to speak and act on impulse. That's your description of his personality, but suppose you want to give a more scientific statement. So you note that in neuroscience, damage to the prefrontal cortex can produce impulsivity. Aha! So maybe Trump's prefrontal cortex is underactive! Or maybe he has a personality disorder! Yet these aren't explanations, let alone a scientific ones, for Trump's rashness. They're just more sciencey and impressive ways of saying he's rash. We don't need these kinds of quasi-scientific analyses of Trump's (or anyone's) character. We should stick to describing and commenting on the behaviour that we can directly observe. If Trump is rash, then that's it: he's rash. It doesn't matter what's going on in his brain to make him that way. If he's egotistic and selfish, then just say so - it adds nothing to the discussion to speculate about whether he meets criteria for 'narcissistic personality disorder', not to mention that such a diagnosis-at-a-distance is ethically questionable. More broadly, as I've argued previously, neuroscience can answer questions about the brain but most political and social questions are about behaviour. Now, while all behaviour is the product of brain activity, it's rarely useful to try to understand a behaviour in neuroscientific terms. If you're thirsty, then you could make me understand your situation by saying "I'm thirsty", and the solution would be a glass of water. A neuroscientific analysis of activity in your brain's subfornical organ wouldn't help anyone.