Does Science Produce Too Many PhD Graduates?

In a new paper, a group of MIT researchers argue that science is producing PhDs in far greater numbers than there are available tenured jobs for them to fill. The authors, engineers Richard C. Larson, Navid Ghaffarzadegan, and Yi Xue, start out by noting that

The academic job market has become more and more competitive... nowadays, less than 17% of new PhDs in science, engineering and health-related fields find tenure-track positions within 3 years after graduation.

But why? Are we simply producing too many PhDs nowadays? Larson et al. approach this question by borrowing a concept from epidemiology: R0 (R nought), known as the basic reproduction number. In the context of an infectious disease, the R0 is the average number of people who are newly infected by the disease by each existing patient. Influenza, for example, has an R0 of about 1.2 - 1.6. If R0 is greater than 1, the disease will spread exponentially. Larson et al. define the academic R0 as the total number of PhD graduates created by (i.e. supervised by) the average tenure-track academic (i.e professor) over the course of the professor's career. If this number is greater than 1, more PhDs will be created than there are tenured posts for them all to occupy - assuming that the number of tenured professors is roughly constant. It turns out that the R0 at MIT is approximately 10: MIT produces some 500 PhDs per year, and it has 1000 faculty. So each faculty member produces 0.5 students per year. Since the average faculty member's career at MIT spans 20 years, each faculty member produces 10 PhDs in total. By using the same approach, Larson et al. say that the R0 across the whole field of engineering in the USA is 7.8. But this varies across specialties. Mining and Architectural Engineering both have a sustainable R0 of just 1, while Environmental Engineering (ironically) is the gas-guzzler of the bunch, with an R0 of 19. 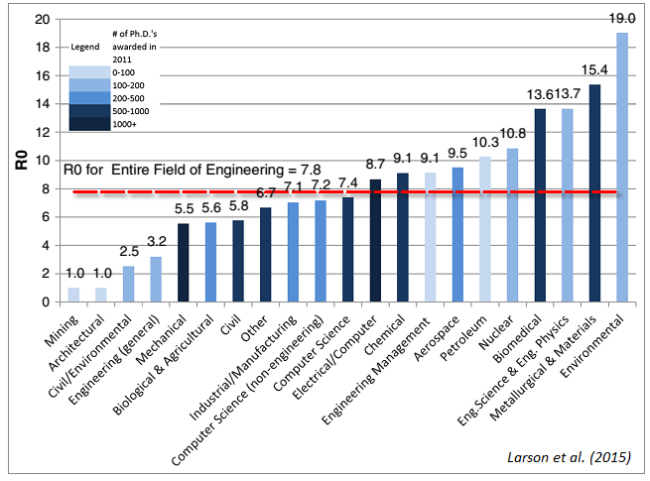 Our back-of-the-envelope calculations suggest that R0 for the entire engineering field is 7.8, which implies that in a steady state, only 1/7.8 (i.e. 12.8%) of PhD graduates in engineering can attain academic positions in the USA... the system in many places is saturated. In demography, any living population eventually meets a ceiling of limited resources. Similarly in academia, the growing PhD population will eventually hit the natural ceiling of limited tenure-track positions. In some fields, it already has hit that limit... the oversupply must move to nonacademic positions or be underemployed in careers that require lesser degrees.

The Malthusian logic of this argument is compelling, but it makes a lot of assumptions. Firstly, it ignores international students, and academics whose careers span multiple disciplines. These issues, however, probably all cancel out at the global level. A more fundamental problem, however, is that Larson et al.'s approach assumes that every PhD graduate wants to become a tenured professor. In fact, some (maybe most?) PhD graduates choose to leave academic research. They don't compete for tenured jobs. Given this, the 'steady state' academic R0 must be higher than 1 - perhaps a lot higher. Larson et al. note this "opting out" issue, but they don't give any estimates for how many people opt out or what the ideal R0 must therefore be. Until we know that, we won't know how excessive the production of PhDs is.