Does Nasal Oxytocin Enter The Brain?

Oxytocin is hot. There are now hundreds of studies looking at the effect of this hormone on the human brain. 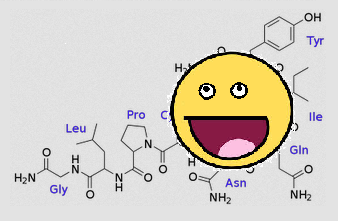 A dose of oxytocin, delivered in the form of a nasal spray, can make people nicer towards the ostracised, reduce marijuana cravings, and 'enhance brain function' in autistic children - and much more, if you believe it. But not everyone does. Some doubt that nasal oxytocin even gets into the brain at all. Oxytocin is a peptide molecule, which means it can't cross the blood-brain barrier and enter the central nervous system. Animal studies suggest that intranasal oxytocin might nonetheless get to the brain via some other route, perhaps along a nerve. But no-one has directly tested this in humans. Now a new paper from Bonn, Germany claims to have put the fears to rest:

They took 13 patients who were due to have a lumbar puncture ('spinal tap') for medical reasons. This procedure samples the cerebrospinal fluid (CSF) that surrounds the spinal cord and brain; if the oxytocin enters the brain, it would certainly be in the CSF. The patients took either oxytocin or placebo nasal spray either 45, 60, or 75 minutes before the sample was taken, and oxytocin levels in the CSF were analyzed. Here's what happened: 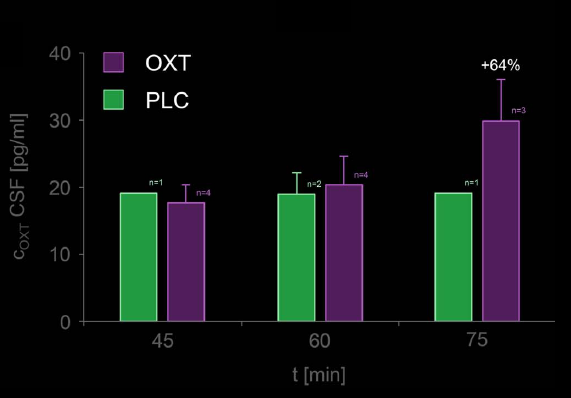 In the group of three people who had an oxytocin spray 75 minutes before the spinal tap, oxytocin levels were higher than in the group person who had a placebo 75 minutes earlier. "64%" higher, though an average of three points is almost meaningless. It's really hard to know what to make of such tiny numbers. Even pooling all the placebo patients, there were just 4 of them. The authors say

But with this amount of data, statistics don't really work. There's no 'absolute' minimum sample size for a one-way ANOVA, but the technique was certainly not intended for data with only 1 observation per group. If we do take these data at face value, they show that nasal oxytocin doesn't enter CSF until over 60 minutes after administration, which would be bad news given that many nasal oxytocin studies use a time delay of 30 or 45 minutes. But there's insufficient data here to call those studies into question, just as it's insufficient to verify 75 minute ones. Using medical lumbar puncture to validate nasal oxytocin in humans is a great idea. This study is an important one and the authors are to be commended for getting these results (lumbar puncture research is a hassle.) But this is just not enough data.