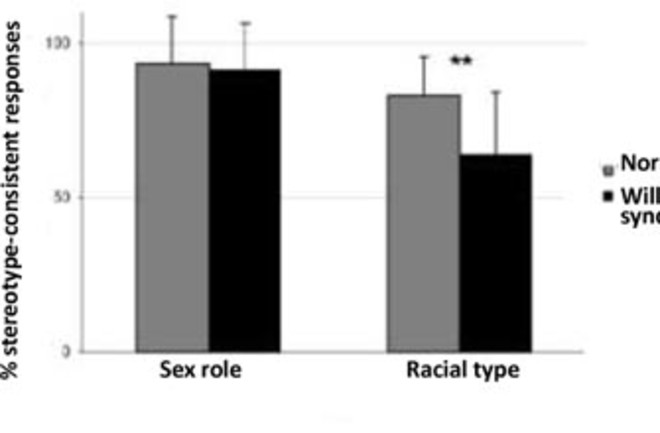 Are the racial stereotypes that each of us holds rooted in social fear? That's the question behind a study out in Current Biology in which researchers investigated children with Williams' syndrome. This genetic disorder comes from the loss of 26 genes and is marked by, among other things, a lack of social fear in patients: Meeting strangers for the first time, they'll treat them like old friends. According to research by Andreas Meyer-Lindenberg and colleagues, those children seemed less given to racial stereotyping than the children without the condition they studied, and the researchers attribute that to the lack of social fear in the kids with Williams'. This result may jibe with previous brain-scanning studies of people with Williams' syndrome which found unusual activity in their amygdalas, a brain center associated with fear. Interestingly, the children with Williams' syndrome showed a similar gender bias as the other children, suggesting a different neurological cause for gender and race bias. However, some scientists point to problems with the study. The sample size is quite small, which is difficult to avoid when studying a rare condition, but still casts doubt on the findings. For instance, 64 percent of the time the children with Williams' syndrome gave answers that could indicate racial stereotyping, but the margin for error was so large that the researchers concluded 64 percent was not significantly different from 50 percent, a set of perfectly color-blind answers. For deeper analysis, check out Ed Yong's post at Not Exactly Rocket Science. Related Content: Not Exactly Rocket Science: Williams syndrome children show no racial stereotypes or social fear 80beats: Study: Damage to Brain’s Fear Center Makes People Riskier Gamblers DISCOVER: How Not To Be a RacistImage: Current Biology