We process real-life situations in our dreams, but that doesn’t mean we should always pay attention to them. 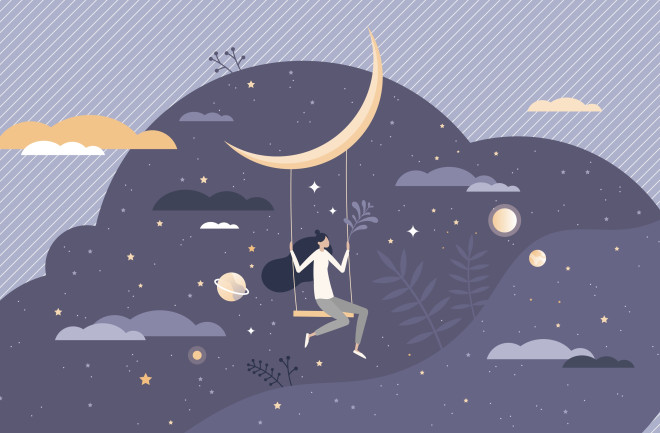 Whether you’re flying through the sky, falling from a twelve-story building or having a romantic relationship with your neighbor, dreams are a window into a world without constraints. The barriers of our everyday life don’t exist. Some parts of our dream world appear realistic, but others are tokens of our imagination. And this begs to question: Do our dreams have meaning? For researchers, this has long been a point of contention.

According to Cognitive Neuroscientist Antti Revonsuo, dreams are meant to prepare us for real-life situations that we may encounter in the future. Dreaming simulates a world where we are immersed, he says. “Dreams helps us to recognize threats and learn how to respond to them in some meaningful way. We’re rehearsing them before they happen,” says Revonsuo.

The Purpose of Dreaming

Dreaming also prepares us for social interactions, says Revonsuo. Positive and neutral dreams may help hone our social cognition and perception. “We are very rarely alone in our dream world, so these dreams help us to rehearse social interaction,” he says.

It wouldn’t make sense for dreams not to have meaning because they’ve stayed throughout our evolutionary history, says Revonsuo. Animals also dream and it’s unlikely that it’s for no reason. Other experts contend that the breadth of dreaming is so wide that defining its purpose and meaning is like defining the purpose of waking thought.

Dreaming is just thinking, but in a different brain state. Defining its purpose depends on what you’re dreaming about, says Harvard psychology professor Deirdre Barrett, author of the book The Committee of Sleep. We agonize about many of the same things when we’re sleeping as when we’re awake, like relationships, work issues, hopes and fears, she says. Dreams are different, but the content is often the same.

“Visual areas of the brain are much more active during dream states as are emotional centers. While linear logic and language areas are damped down,” says Barrett. “We’re not thinking in words as much. We’re thinking in images, simple narratives and in intuitive emotional ways.”

Barrett says that dreams work out many of the same issues that we have when we’re awake, but she doesn't advise that they have a single purpose or even several purposes. “Dreams give us a different idea of how to do things because they help us to think outside of the box and they can solve problems that involve going against conventional wisdom,” she says.

Many of us have methods for approaching issues that stem from our early childhood experiences, says Barrett. But dreams help us to think differently because the prefrontal cortex, which is associated with habits and learned behaviors, is less active when we’re dreaming.

Should Your Dreams Ever Concern You?

You may find dreams automatically concerning when they’re terrifying. Things like post traumatic nightmares — more intense nightmares that may replay actual traumatic events and are particularly violent — should concern you. But in most cases, says Barrett, they already do because we wake up petrified.

Generally, however, people tend to get more concerned with their dreams than necessary. It’s relatively normal to have some sexual dreams about someone other than your monogamous partner. People may also have dreams where they’ve murdered someone, but that doesn’t mean they’re violent people in real life. Barrett says most of the time she’s telling clients not to worry about their dreams, most commonly those that involve sex or aggression.

“Dreams are casting a pretty loose net of associations to things that may be metaphorically a part of ourselves, but aren’t closely tied into any actions that we may take in real life,” says Barrett.

While it’s worth looking at your dreams and noticing some of the themes that might prevail, feeling guilty about a dreamed sexual encounter, isn’t necessary. Still, dreams can give us a different perspective on threats and problems that we encounter in our everyday life. What we dream at night can allow us to think in a more “flexible” way, says Barrett, and find new solutions to the issues that pervade our days.