argues that neuroscientists may need to look at brain activity from a new angle, in order to understand neural dynamics. According to the authors, David Alexander et al. of Leuven in Belgium,

A ubiquitous methodological practice in cognitive neuroscience is to obtain measure of brain activity by analyzing the time course of activity alone, or the spatial topography of activity alone. This usually results in throwing away most of the data as irrelevant: It is considered enough to analyze the time series at a site of interest, or to take spatial snapshots at some relevant times. This practice boils down to treating brain data as if it were space–time separable.

If a signal is 'space-time separable', this means in effect that one can hold either space or time constant, and then measure the other. For instance, in an EEG experiment, we typically consider the signal from one particular electrode (i.e. holding space constant) and plot a graph of how it varies over time. In a task-based fMRI experiment, we hold time constant and plot the spatial extent of activity at that time point. By doing this, we are assuming that activity in the brain takes the form of standing waves. However, Alexander et al. say that while we can treat brain activity in this way, we shouldn't, because brain activity is dominated by travelling waves, activations or deactivations which move through the brain, and in which the temporal and spatial dimensions are therefore not distinct.

Recent research has suggested the importance of traveling waves of activation in the cortex... Critically, traveling waves are not space–time separable. Traveling wave activity has been measured in the cortex at a number of scales, including columns, Brodmann areas, and whole cortex... Large-scale cortical waves have been shown to arise at a variety of frequencies, from the subdelta through to gamma bands. Their prominence suggests that the correct frame of reference for analyzing cortical activity is the dynamical trajectory of the system, rather than the time and space coordinates of measurements.

Here's my illustration of the problem, adapted from one of Alexander et al.'s figures: 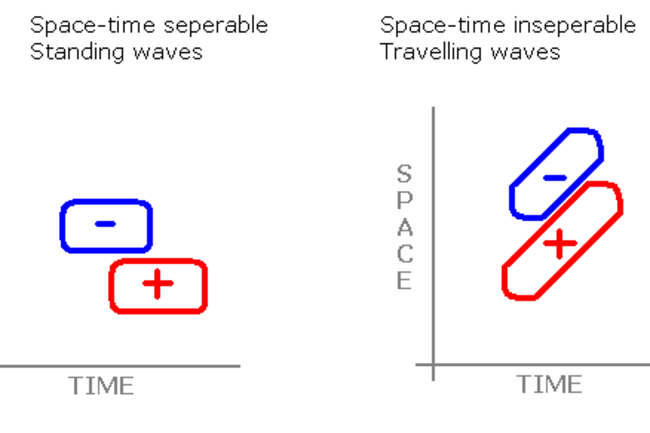 On the left we see a scenario in which a negative (blue) activation in one area is followed by a positive (red) activation in a nearby area. These 'blobs' are standing waves. But what if the positive and negative activations travel through the brain, as on the right? Recognizing the importance of travelling waves means adopting a new approach to data analysis. So what do we need to do? Alexander et al. say that we need to find a coordinate transformation, that converts the space and time dimensions into a new coordinate space. They liken this to looking at the data from an angle: 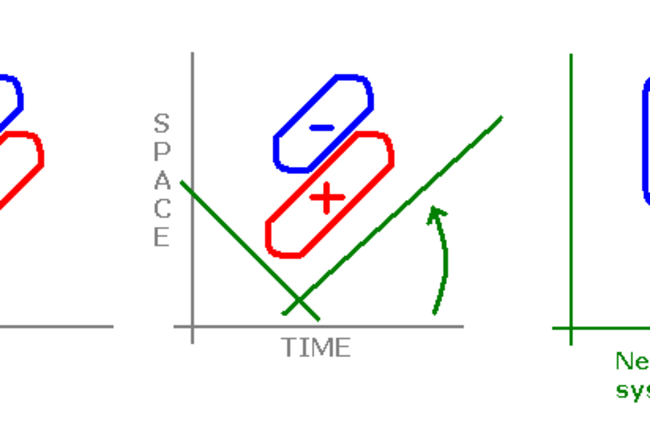 Once we do this, we would finally be able to assume something like space-time separability. In particular, the coordinate transformation would allow us to assume that neural activity is additive, meaning that the subtraction method would be valid. Currently, much of cognitive neuroscience is based on applying the subtraction method in space and in time. According to Alexander et al. this is probably a mistake, and means that we are 'barking up the wrong tree' in a general sense. They conclude

We question the very notion that neurological entities are events occur at certain locations and times, rather than being comprised of trajectories that extend over locations and times... If cortical activity is not space–time separable, then it seems likely that neither are perception or action. We take the view that measurements in neuroscience are not of events but of trajectories.

It's fascinating stuff, although Alexander et al. don't go into detail about how this works in practice. How are we to find the coordinate transform that allows us to rule these traveling waves, in any given case? And just what kind of additional understanding can we hope to find once we do so?