Buddhists believe in God, but don't care as much

One of the points that I run into all the time is that Buddhism is a religion without god, that is it is an atheistic religion. I admit this assertion as an ideal or elite belief, but contend that the vast majority of the world’s Buddhists are theists, so one can’t simply present Buddhism as an atheistic religion when most Buddhists are not atheists. I do tend to agree that Western converts to Buddhism are often atheists, and that’s one reason Westerners view it as atheistic religion since the Buddhists they are most likely to know are not ethnically Asian ones. The US Religious Landscape Survey actually has some questions which assess the beliefs of American Buddhists. 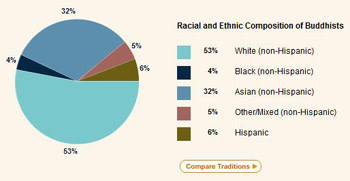 As you can see the majority of American Buddhists are theists. To the left you see the ethnic distribution; even allocating all the atheists and agnostics (“Don’t know/ refused/ other”) to whites still leaves the majority of white American Buddhists admitting at least some belief in god! So you can’t dismiss this result purely as an artifact of Asian immigration to the United States introducing “debased” Buddhism. This is not to say that I believe Buddhism is a theistic religion; one can’t deny that many people are Buddhists who are admitted atheists. It is to offer that to generalize about a religion one must look at the true distribution of beliefs and practices, not just scholarly inferences based on textual clues in their scriptures. Of the American religions listed Buddhism did have the highest number atheists (Jews were second at 10%), so it is correct to say that of all major World Religions atheistic interpretations are most prevalent in Buddhism. But it is too much to make the claim that Buddhism is an atheistic religion as such.