The differences between heterosexual and homosexual people are as much the subject of fascinating science as they are a source of social debate. And in many cases, the former can help to inform the latter. There is now plenty of research which shows that a person's sexual orientation, far from being a phase or a lifestyle choice, is a reflection of fixed properties of their brain that develop at an early age. 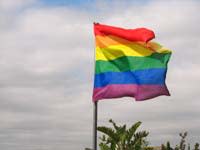 Using magnetic resonance imaging (MRI), Savic and Lindstrom showed that the brain's two halves are almost exactly the same size in straight women and gay men. However, both straight men and lesbians had slightly asymmetrical brains, with the right hemisphere being 1-2% larger on the left. These differences only applied to the large cerebrum, which makes up most of our brains. The two halves of the cerebellum, which sits at the brain's base, were symmetrical in all of the volunteers, regardless of sex or sexual preference.

Earlier studies have found similar results for patterns of brain activity. For example, parts of the brain involved in reward and emotion are more strongly activated when straight men and lesbian women look at female faces, and when straight women and gay men see male faces. The same patterns apply when people smellchemicals that probably act as human pheromones. But attractive faces and enticing pheromones are both related to sex, and responses to them could be learned over time.

But Savic's and Lindstrom's new study shows that these differences extend to fundamental aspects of the brain that aren't directly linked to sex or behaviour, and that are probably fixed from birth.

The idea that straight men have more asymmetrical brains than gay men fits with previous research. When listening to sounds, straight men tend to have a bias for their right ear, which both gay men and straight women lack. They also tend to outperform gay men and straight women in tests of spatial awareness, where success depends on a part of the brain - the parietal cortex - which is usually larger in men than in women. 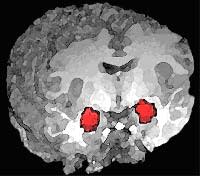 Savic and Lindstrom also used another brain-scanning technique called PET to measure the flow of blood into the amygdala, a part of the brain involved in processing emotions. These visuals revealed the connections that link the amygdala to other parts of the brain. From previous studies, we know that these connections usually link to different areas in the brains of men and women, and sprout from different hemispheres -the right in men, and the left in women.

That was the pattern that Savic and Lindstrom saw the straight volunteers from their study, but the homosexuals showed the reverse pattern. For example, the amygdalas of gay men had more in common with those of straight women - the two halves were well-connected, they had more neurons projecting from the left half (as opposed to the right in straight men) and these neurons connected to the same parts of the brain that those of straight women do.

These connections provide some tantalising hints about how gay and straight people differ in their behaviour. In straight men and lesbians, the amygdala (which influences our emotional reactions to stress) connects to the sensorimotor cortex and the striatum, parts of the brain involved in the "fight or flight" response. But in straight women and gay men, the amygdala's connections feed into the anterior cingulate cortex and the subcallosum. These areas influence our moods and have been implicated in mood-related disorders such as anxiety and depression.

That certainly seems to fit with what we know about these "affective disorders". Women are 2-3 times more likely than men to suffer from them, while gay men are also more vulnerable to depression. However, Savic and Lindstrom caution that their results don't tell them how far these conditions are affected by the architecture of the brain. Certainly, in gay men, social stigma is an equally likely explanation for higher rates of depression.

It's very likely that the relative size of the brain's two halves are set very early in development. Other groups have certainly detected asymmetries before in children, and some have even done so in the brains of foetuses. Nonetheless, the evidence isn't entirely consistent and while Savic and Lindstrom think that it's likely that these traits are fixed from birth, they say that it's still an "open question".

Likewise, it's not clear why some brains are asymmetrical and others are not, although animal studies provide some clues. In animals, homosexuality in females is often attributed to an overabundance of male hormones - androgens - in the womb, while male homosexuality results from a lack of these. In male monkeys and rats, the right side of the brain has higher concentrations of receptors for these male hormones to lock onto; in females, they are distributed equally among the two halves. Whether the same applies to humans, and how that might eventually affect our behaviour, are questions for future studies.

Reference:Savic, I., Lindstrom, P. (2008). PET and MRI show differences in cerebral asymmetry and functional connectivity between homo- and heterosexual subjects. Proceedings of the National Academy of Sciences DOI: 10.1073/pnas.0801566105