When we cooperate on certain tasks, our brainwaves might synchronize. This finding could upend the current understanding of consciousness. 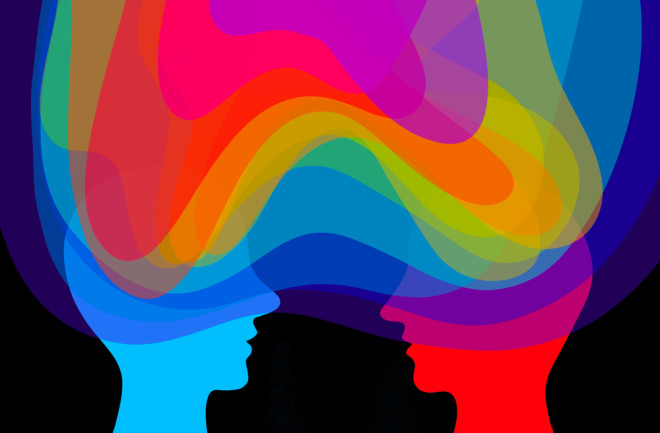 People synchronize in various ways when we interact with one another. We subconsciously match our footsteps when we walk. During conversations, we mirror each other's postures and gestures.

To that end, studies have shown that people synchronize heart rates and breathing when watching emotional films together. The same happens when romantic partners share a bed. Some scientists think we do this to build trust and perceive people as similar to ourselves, which encourages us to behave compassionately.

Surprisingly, people synchronize their neural rhythms, too. Researchers like Tom Froese, a cognitive scientist from the Okinawa Institute of Science and Technology in Japan, think that these findings could upend our current models of consciousness.

You may have experienced this while playing music with someone and falling into rhythmic and melodic harmony. Or you may collectively solved a problem with a team. Perhaps it felt like you were operating at the same frequency — in reality, this might have not been far from the truth.

Such inter-brain neural synchronization has been observed in people engaging in meaningful interactions. But what does it actually mean?

What We Know About Brain Syncing

Our brains are made up of billions of neurons. When they fire — sending information to nearby neurons — they give off electrical signals. Billions of neurons fire to carry out specific cognitive tasks, like producing thoughts or controlling the body’s movement.

Cognitive tasks often require different regions of the brain to ‘speak’ to one another, allowing information to be transferred and integrated. Some scientists claim that this information transfer occurs when neural frequencies from different brain regions align. This is known as phase synchronization.

These frequencies, or oscillations, are measured in cycles per second, or hertz (Hz). There are a few different ways of measuring this neural oscillatory activity, but the most common method is known is electroencephalography (EEG), where small metal discs placed on the scalp measure electrical output.

Researchers have observed people’s neural activity while they complete cognitive tasks with techniques like EEG, functional magnetic resonance imaging (fMRI), which is a machine that detects where oxygenated blood is flowing in the brain. Functional near-infrared spectroscopy (fNIRS) also detects blood flow in the brain. With these techniques, scientists have peered into people’s minds as they complete tasks in pairs and groups.

Neuroscientists needed to rule out the possibility that this neural synchronization occurred due to a shared environment, similarities in sensory input (what people could see, hear, smell), or in motor output (how they moved their bodies).

One such study, published in PLOS One in 2016, examined the neural activity of pilots and co-pilots during a flight simulation. In this case, the environment remains the same but the level of cooperation varies throughout the task. Pilots and co-pilots exhibited high levels of inter-brain connectivity during takeoff and landing because they needed to act as a team, yet they showed lower levels during the cruise phase of the flight when the two pilots acted independently.

A potential explanation: Functional links across brains increase when people work together, but not for those who are competing or taking on identical tasks simultaneously.

In a different study from 2018, greater neural synchronization occurred between subjects when they were told to complete a puzzle together. Synchronization levels dropped when the same subjects had to complete identical puzzles individually, or when both watched other people finish one.

As for the subjective experience of individuals in such studies, higher feelings of cooperativeness were aligned with higher levels of neural synchronization. Additionally, study participants’ level of inter-brain synchrony could predict subjective feelings of engagement, affinity, empathy and social connection.

As most neuroscientists currently understand, no localized region or network in the brain is solely responsible for our conscious experience. Instead, some researchers believe that the neural basis of consciousness — specifically the first-hand experience of it — comes from large-scale interactions between different brain regions via neural oscillatory activity.

That would render consciousness an emergent property of multiple interacting networks, so  it couldn’t be reduced to any single network.

Given this knowledge, along with the changes that transpire during cooperative social interactions, Froese argues that a shift in our understanding of consciousness is warranted. Namely, he supports an ‘extension of consciousness’.

Froese isn’t suggesting that consciousness lacks a neural basis; however, an individual’s neural activity is embodied in their interactions with the world. Now, we realize that other people may play a role.

The conscious mind’s boundaries could also be under constant renegotiation during exchanges with the environment and other people, Froese explained in a 2020 Neuroscience of Consciousness article. When we socialize, inter-brain synchronization neurally binds us together and extends consciousness.

“An upshot of this proposal is that it can potentially validate our most intimate experiences: When we become aware that ‘we’ are sharing a moment with someone else, it is no longer necessarily the case that we are fundamentally separated by our distinct heads — we could really be be two individuals sharing in one and the same unfolding experience,” he wrote.

Froese’s ideas build on a school of thought called complex systems theory, which would agree that consciousness emerges from multiple interacting brain networks.

He goes a step further by asserting that certain characteristics central to our experience of consciousness, like our deep sense of social connectedness, cannot be explained by reducing the system to one individual brain. Similarly, water can’t be reduced to its components of hydrogen and oxygen because the two complex systems’ interactions drive its complex behavior.

The mainstream neuroscience field hasn’t yet accepted these ideas, though. Many researchers assert that the brain requires physiological, localized connections to transfer information. The language of the brain is communicated via anatomical connections, rather than regions speaking to each other through phase synchronization.

But Froese extends the system beyond the parameters of our own heads, which may be viewed as somewhat scandalous by some. He sees it as making sense of humanity. “We have to move away from this solipsistic, brain-in-a-vat, neuro-reductionist view of human consciousness,” Froese says.