Brain Scans: Don't Throw Out The Baby With The Dead Salmon

Is neuro-skepticism in danger of going too far? Is it time to take a critical look at critiques of neuroscience? Martha Farah of the University of Pennsylvania says yes, in a Hastings Center Report just published: Brain Images, Babies, and Bathwater: Critiquing Critiques of Functional Neuroimaging Farah covers a broad spectrum of criticisms, ranging from 'fMRI doesn't measure brain activity directly, it only measures blood oxygen', to the Voodoo Problem, and the charge that 'brain images exert a seductive allure.' I don't have space to discuss these in detail, but I can recommend the paper as a clear and balanced discussion of these tricky issues. She concludes on a moderately positive note (emphasis mine):

Inferences based on functional brain imaging, whether for basic science or applications, require scrutiny. As we apply such scrutiny, it is important to distinguish between specific criticisms of particular applications or specific studies and wholesale criticisms of the entire enterprise of functional neuroimaging. In the first category are criticisms aimed at improving the ways in which imaging experiments are designed and the ways in which their results are interpreted. Uncontrolled multiple comparisons, circular analyses and unconstrained reverse inferences are serious problems that undermine the inferences made from brain imaging data. Although the majority of research is not compromised by any of these errors, a substantial minority of published research is, making such criticisms both valid and useful. In contrast, the more sweeping criticisms of functional imaging concern the method itself and therefore cast doubt on the conclusions of any research carried out with imaging, no matter how well designed and carefully executed. These more wholesale criticisms invoke the hemodynamic nature of the signal being measured, the association of neuroimaging with modular theories of the mind, the statistical nature of brain images, and the color schemes used to make those images seductively alluring. As mentioned earlier, each of these criticisms contains an element of truth, but overextends that element to mistakenly cast doubt on the validity or utility of functional neuroimaging research as a whole. None of the criticisms reviewed here constitute reasons to reject or even drastically curtail the use of neuroimaging.

Farah's distinction between 'particular' and 'wholesale' criticisms of neuroimaging is a very important one. I prefer to use slightly different terminology here, characterizing criticisms as 'pragmatic' vs 'radical'. While pragmatic critics question how we scan brains (and how we can do it better), radical critics question why we do so (and whether we even should.) Yet these two genres of criticism are often conflated in discussions of neuroskepticism. For example, the famous fMRI scan of a Dead Salmon was created to illustrate a purely pragmatic point: the need for multiple comparisons correction. The authors showed that if you don't use appropriate statistics, you can 'find' neural activity in the brain of a dead fish, whereas if you do it right, the fish stays dead. 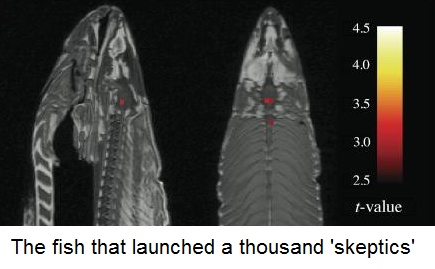 This was an important point, but it was only ever meant to be a technical one. Yet five years later, the Salmon is regularly mentioned in wide-ranging discussions of 'the limits of fMRI' or 'neuroskepticism'. I've even seen this narrow statistical example share a page with a philosophical discussion of qualia. The two issues really have nothing in common. I'm afraid to say that nowadays, a good litmus-test for a superficial piece of writing about fMRI is whether it briefly mentions the Salmon before moving on to something else. Confusing the pragmatic criticisms with the radical ones in this way blunts the impact of both. But neuroscientists shouldn't forget that both kinds of criticism can have merit. In general, neuroscientists are good at discussing pragmatic issues. We're constantly improving neuroimaging methodology and fixing problems with statistics. However, I worry that we are not so willing to give radical criticisms a hearing. For example, Farah discusses the (radical) argument that neuroimaging doesn't tell us much because all it tells us is where things happen in the brain, not how they happen. Farah correctly points out that not all imaging studies are founded on a localization (where-in-the-brain) approach. But she notes that some studies are guilty of this. I would add that in some fields of neuroscience (e.g. psychiatry), the proportion is rather high. So if the critics of localization are right, much of modern neuroscience is barking up the wrong tree. The critics may or may not be right, but I think neuroscientists should be taking a more active role in this debate. We must be willing to confront the possibility that not just our methods, but also our basic assumptions, need to evolve and improve.