If true, this could be explosive, because a lot of neuroscience is built on the assumption that those two things don't interact. So what's going on? We know that the brain is active all of the time. Even if you're not doing anything in particular, there is 'spontaneous' (or resting-state) activation, which varies over time. But what if something in particular does happen, causing brain activation? Is that evoked activity a constant that simply gets added on to the pre-existing activity, or do they interact in some more complex way? The new paper's author, Biyu He, argues as follows. If evoked activity is independent of spontaneous activity and they sum additively, then the variance of the brain activation ought to increase after a stimulus. That's because whatever variability was there spontaneously would still be there, and then the variability of the stimulus-evoked activity would be added on to that. Even if the evoked response was completely fixed (zero variance), the total signal variance would stay the same. But is that how the brain works? He considered data from a simple fMRI scanning study, in which participants had to press a button in response to a simple visual stimulus. Essentially, He claims that variance decreases following stimulus presentation. This just can't happen, if evoked and spontaneous activity sum additively. Rather, these data imply that they interact.

Here's the key graphs. After the onset of a stimulus (time=0), the signal (averaged over all trials) increases in most of the brain regions of interest; each coloured line is a region, and the black line's the average. Nothing new there. But He shows that the variance of the signal across all trials decreases at the same time. This is a new finding (I think) and pretty counterintuitive. What's more, areas (voxels) that show a larger increase in signal, also show a larger decrease in variance: 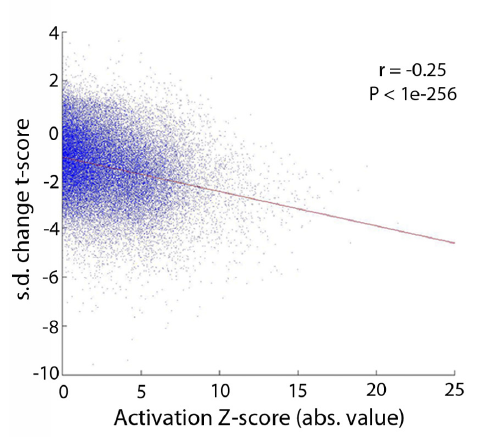 If it's real, non-additivity would be a very interesting phenomena in itself. But it could also have big implications, because it would undermine the assumptions behind conventional fMRI data analysis. Conventional analysis averages across all of the events of interest (e.g. every time a stimulus appears) and looks for areas where activity increases, or decreases, on average. However, He's results raise the possibility that the same stimulus could cause both increases and decreases, depending on the spontaneous activity baseline preceding each event. Average them all together, and they might cancel out, so you couldn't see them. Conventional fMRI studies might, in this way, be missing interesting activations. This is very interesting stuff, and I wonder what it means. Suppose that when there's no stimulus, brain activity is dominated by internally generated events (day-dreams, memories, whatever). These are highly variable, because at any given moment, you could be thinking about anything. But then, at the moment an important external event occurs, the brain's activity becomes dominated by that. In which case, is it any surprise that activity is less variable just at the time of an external event?