We live in societies where some people are richer than others – though the extent of wealth inequality varies greatly around the world.

In general, it’s sad but true that poor people suffer more diseases. Within a given country almost all physical and mental illnesses are more common amongst the poor, although this isn’t always true between countries.

So if a certain disease is more common in rich people within a country, that’s big news because it suggests that something unusual is going on. Autism spectrum disorders (ASDs) have long been known to show this pattern, at least in some countries, but this has often been thought to be a product of diagnostic ascertainment bias. Maybe richer and better-educated parents are more likely to have access to services that can diagnose autism. This is a serious issue because autism often goes undiagnosed and diagnosis is rarely clear-cut.

An important new PLoS paper from Wisconsin’s Durkin et al suggests that, while ascertainment bias does happen, it doesn’t explain the whole effect in the USA: richer American families really do have more autism than poorer ones. The authors made use of the ADDM Network which covers about 550,000 8 year old children from several sites across the USA. (This paper also blogged about here at C6-H12-O6 blog.)

Basically, this allowed them to detect autism even in kids who haven’t got a formal diagnosis, based on reports of behavioural problems at school etc indicative of autism. Clearly, this is going to underestimate autism somewhat, because some autistic kids do well at school and don’t cause any alarm bells, but it has the advantage of reducing ascertainment bias.

What happened? The overall prevalence of autism was 0.6%. This is a lot lower than recent estimates in 5-9 year olds in the UK (1.5%), but the UK estimates used an even more detailed screening technique which was less likely to leave kids undetected. 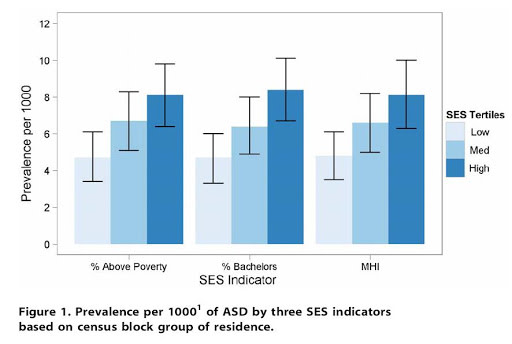 The headline result: autism was more common in kids of richer parents. This held true within all ethnic groups: richer African-American or Hispanic parents were more likely to have autistic children compared to poorer people of the same ethnicity. So it wasn’t a product of ethnic disparities.

Crucially, the pattern held true in children who had never been diagnosed with autism, although the effects of wealth were quite a bit smaller: 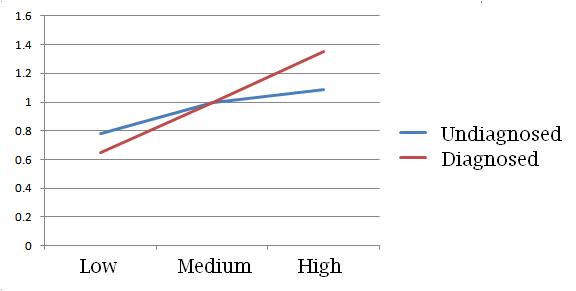 The difference in the slope of the two lines suggests that there is some ascertainment bias, with richer parents being more likely to get a diagnosis for their children, but this can’t explain the whole story. There really is a correlation with wealth.

So what does this mean? This is a correlation – the causality remains to be determined. There are two obvious possibilities: to put it bluntly, either being rich makes your kids autistic, or having autistic kids makes you rich.

How could being rich make your children autistic? There could be many reasons, but a big one is paternal age: it’s known that the risk of autism rises with the age of the father, maybe because the sperm of older men accumulates more genetic damage, and this damage can cause autism. In general richer people wait longer to have kids (I think, although I can’t actually find the data on this) so maybe that’s the cause.

How could having autistic kids make you richer? Well, unfortunately I don’t think it does directly, but maybe being the kind of person who is likely to have an autistic child could. Autism is highly heritable, so the parents of autistic children are likely to carry some “autism genes”. These could give them autistic traits, or indeed autism, and autistic traits, like being intensely interested in complex intellectual matters, can be a positive advantage in many relatively well paid professions like scientific research, or computing. Marginal Revolution‘s Tyler Cowen recently wrote a book all about that. I hope I will not offend too many when I say that in my experience it’s rare to meet a scientist, IT person or, say, neuroscience blogger, who doesn’t have a few…