Athletes Have High Rates of PTSD

As many as one in eight elite athletes may develop post-traumatic stress disorder after experiencing or witnessing severe injury, yet the condition is rarely treated. 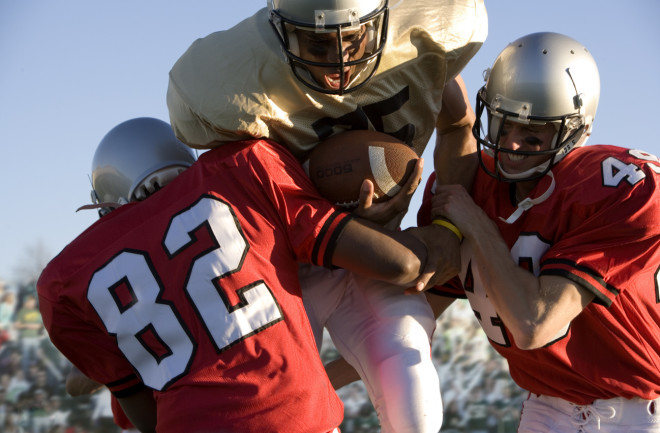 At a university swimming pool, a diver launches forward and then rotates backward for a reverse dive — but they don’t have enough height or distance from the board, and the back of their head cracks against it. Across campus, a gymnast lands wrong during a tumbling routine and badly injures their back. And on the football field, two players collide and one is left unconscious on the turf. In each of these hypothetical scenarios, athletes have endured bodily harm, an experience that can lead to post-traumatic stress disorder.

Almost everyone will experience a traumatic event at least once in their life, but not everyone develops PTSD. Studies have found the general population has a lifetime rate near 9 percent. Certain groups, however, undergo experiences that make them more prone to PTSD; military members, for example, have rates as high 38 percent. Similarly, about 18 percent of nurses and 33 percent of ICU nurses meet the diagnostic criteria for PTSD.

Studies now show that PTSD is also more common among athletes than in the general population, and as many as one in eight elite athletes might suffer from it. Yet as researchers continue to learn more about how athletes develop PTSD, they’re also finding that it typically goes untreated.

The American Psychiatric Association’s Diagnostic and Statistical Manual of Mental Disorders (DSM-5) classifies PTSD within trauma and stressor-related disorders. The disorder can occur when someone is exposed to an event that threatens death, bodily harm or sexual violence.

The person doesn’t need to experience the traumatic event firsthand to be affected, however; they may also witness trauma as it happens to someone else or even hear about it happening to a close family member or loved one. When the divers in the scenario above, for example, witnessed their teammate being rescued from the water, the event could trigger PTSD — although many factors influence whether someone develops the disorder.

Symptoms of PTSD are sorted into four categories: intrusive symptoms related to the event, avoidance of stimuli associated with the event, negative or worsening moods, and marked arousal and reactivity. These symptoms must persist for more than one month, cause significant distress, and not be related to prescribed medications or other substance use.

Intrusive symptoms, for example, include five types of distressing thoughts — such as flashbacks, traumatic dreams or recurring memories. For this diagnosis, the patient must have at least one of these symptoms. Avoidance of related stimuli also requires the presence of at least one symptom; whereas two symptoms are required for diagnoses of negative or worsening moods and marked arousal and reactivity.

Athletes are more prone to PTSD than the general population, with estimates ranging from 13 to 25 percent. There’s plenty of reasons why this might be the case. Football has the most injuries among players in both practice and games. And cheerleading has the most catastrophic injuries, meaning injuries that could result in death, permanent disability or temporary loss of function. These include spinal cord injuries, brain bleeds and skull fractures.

Athletes who suffer concussions are also more likely to develop PTSD: A 2018 study in Clinical and Translational Medicine found that post-concussed athletes demonstrated symptoms of PTSD at a higher rate than a healthy control group. These athletes reported distressing symptoms; almost a quarter had trouble sleeping and around 19 percent said they tried to avoid situations reminiscent of their injury. Some also had intrusive thoughts about their incident or said they relived it through flashbacks.

The authors of the study concluded that, although physical symptoms could resolve on their own, some athletes might develop PTSD. For this reason, they recommend that sports programs adopt PTSD screening for concussed athletes. Problematically, however, other studies show that most athletes don’t receive adequate mental health treatment after experiencing or witnessing trauma.

Why don’t more athletes seek mental health treatment? Research demonstrates that many athletes avoid treatment due to fears they will be stigmatized by teammates or coaches.

Sports teams are their own culture, in which teammates work toward a shared goal. Toxic cultures can develop when a lack of leadership allows team members or coaching staff to perpetuate abusive behaviors or discriminatory ideologies. Athletes on teams that blame or shame a person for their injury, for example, are more apt to show PTSD symptoms.

At times, a team or a coach might be the very source of the trauma. Athletes may feel pressured to overtrain or work through injuries. They may also be subject to physical, verbal or sexual abuse by teammates or coaching staff. In these instances, healing can’t begin until the trauma stops.