Are you too optimistic? Science can fix that. 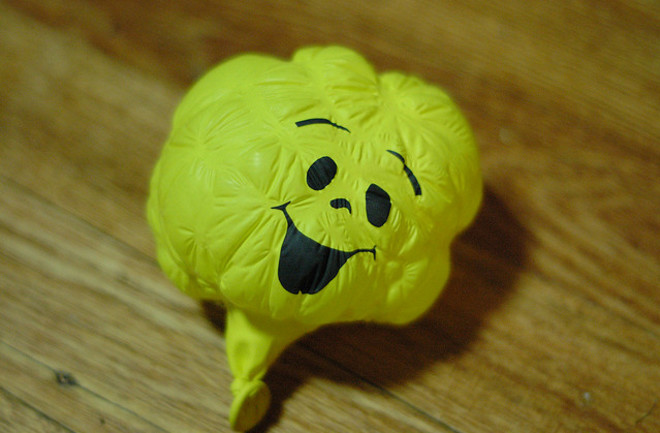 Photo: flickr/gemslingLike most people, you probably suffer from "unrealistic optimism": a tendency of healthy individuals to underestimate their likelihood of future misfortune, such as illness. Fortunately, scientists have not only figured out which part of the brain is responsible for this behavior, but they have also figured out how to stop it. Apparently, stimulating the right inferior frontal gyrus -- a region of the brain near your temple -- by flushing the left (but not right) ear with cold water made subjects much less optimistic about their risk of contracting illness in the future. You're welcome!Vestibular stimulation attenuates unrealistic optimism. "INTRODUCTION: Unrealistic optimism refers to the pervasive tendency of healthy individuals to underestimate their likelihood of future misfortune, including illness. The phenomenon shares a qualitative resemblance with anosognosia, a neurological disorder characterized by a deficient appreciation of manifest current illness or impairment. Unrealistic optimism and anosognosia have been independently associated with a region of right inferior frontal gyrus, the pars opercularis. Moreover, anosognosia is temporarily abolished by vestibular stimulation, particularly by irrigation of the left (but not right) ear with cold water, a procedure known to activate the right inferior frontal region. We therefore hypothesized that left caloric stimulation would attenuate unrealistic optimism in healthy participants. METHODS: Thirty-one healthy right-handed adults underwent cold-water caloric vestibular stimulation of both ears in succession. During each stimulation episode, and at baseline, participants estimated their own relative risk of contracting a series of illnesses in the future. RESULTS: Compared to baseline, average risk estimates were significantly higher during left-ear stimulation, whereas they remained unchanged during right-ear stimulation. Unrealistic optimism was thus reduced selectively during cold caloric stimulation of the left ear. CONCLUSIONS: Our results point to a unitary mechanism underlying both anosognosia and unrealistic optimism, and suggest that unrealistic optimism is a form of subclinical anosognosia for prospective symptoms." Related content: NCBI ROFL: Laughing rats are optimistic.NCBI ROFL: On the distinction between yuppies and hippies.NCBI ROFL: If you think you don't suck, you probably do