Thanks to newly-developed "super-resolution" microscopy techniques, a group of French neuroscientists have discovered a remarkable world of complexity on a tiny scale. Writing in the Journal of Neuroscience, Deepak Nair colleagues report that: Super-Resolution Imaging Reveals That AMPA Receptors Inside Synapses Are Dynamically Organized in Nanodomains Regulated by PSD95 Neurons communicate with each other via chemical synapses. Here, two cells almost touch each other, and one of them can release a messenger molecule (neurotransmitter) which activates proteins (receptors) on the receiving (postsynaptic) neuron, thus conveying information. Here's part of a single cell: the synapses are where the little 'spines' or 'bulbs' meet those present on another cell (not pictured).

Until now, it's been believed that within a synapse, receptors are just randomly distributed over the postsynaptic cell membrane. However, Nair et al's work reveals an unsuspected level of organization. It turns out that receptors - or at least AMPA receptors, the only kind they looked at - are in fact clustered together into structures the authors dub nanodomains. Each nanodomain contains about 20 receptors, and is about 70 nanometers across. This is small. It's roughly the size of a virus, and about 1/1000th the width of a human hair. Take a look: Here's the distribution of GluA1 and GluA2 AMPA receptors within a single postsynaptic bulb. They bunch up: 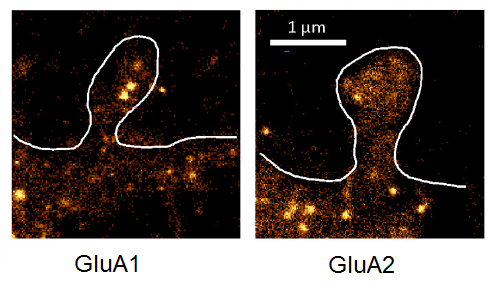 Here's a gallery of various nanodomains. They vary somewhat in size and shape, but not very much. Each one can be modelled as an oval patch of varying size and orientation: 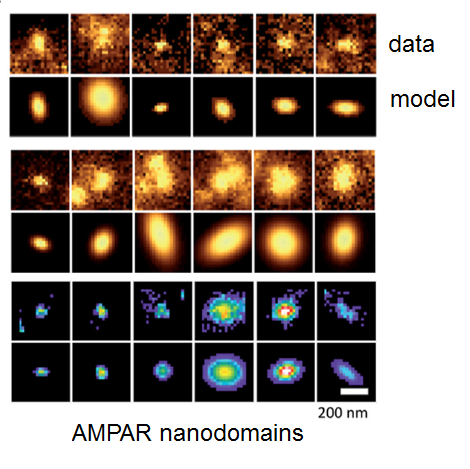 When I saw this picture, it didn't call to mind anything else I'd ever seen in neuroscience. Rather, it reminded me of the Hubble Deep Field images of distant galaxies... and funnily enough, one of the proteins that plays a secondary role in this paper is called stargazin. As if all this wasn't amazing enough, Nair et al were making all these observations on living neurons, so they could see how the receptors moved around in real time. Although each individual receptor is fairly mobile, the nanodomains seem to be relatively long-lived, with lifetimes of at least an hour being observed:

So what does all this mean? Time will tell, but the authors point out that if some receptors are bunched together, the amount of neurotransmitter required to hit all of those receptors would be lower than if they were scattered randomly. But equally, if some areas of the postsynaptic membrane are pretty much empty, transmitters hitting those spots might not do much. So nanodomains could determine the 'quantum-ness' of neurotransmission. This is especially interesting given the convincing evidence in the paper (that I don't have space to cover in detail) that these nanodomains are organized by a family of proteins some of which have been implicated in diseases such as autism.