A Neural Response to "Trigger" Stimuli in PTSD?

new paper in the prestigious Journal of Neuroscience

Soldiers with PTSD display inter-regional hypersynchrony at high frequencies (80–150 Hz), as well as a concomitant decrease in signal variability. The two patterns are spatially correlated and most pronounced in a left temporal subnetwork, including the hippocampus and amygdala. We hypothesize that the observed hypersynchrony may effectively constrain the expression of local dynamics, resulting in... functional networks becoming “stuck” in configurations reflecting memories, emotions, and thoughts originating from the traumatizing experience.

Here's some of the results. In this image, we see the effect of exposure to "triggering" war-related stimuli on the soldiers' brains. The spiderweb of red lines shows increased synchrony across the brain, especially in the high frequency gamma band (both low and high gamma), across both military groups (PTSD and non-PTSD). 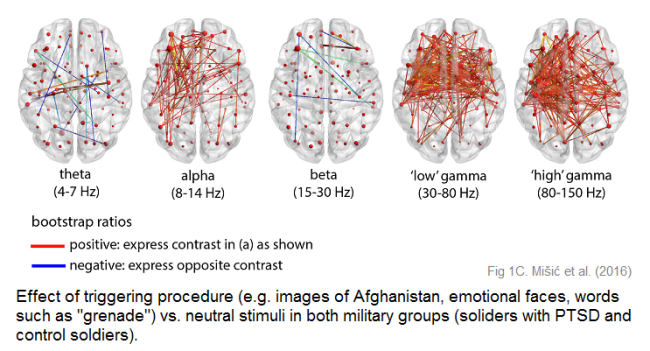 Mišić et al. perform various group comparisons (not pictured here) to conclude that brain activity in response to triggering stimuli shows hypersynchrony and reduced signal variability - although the soldiers with PTSD also show a smaller change in brain activity following the triggers, suggesting that they may have been, so to speak, 'triggered' at baseline. Now that's rather interesting. But we should be cautious. MEG doesn't just detect neural activity. It also, unfortunately, picks up artifacts, magnetic fields generated outside the brain. These include ocular artifacts, from movement of the eyes, and muscle artifacts, that originate from the activity of various muscles around the head, face, and neck. Worryingly, these non-neural artifacts are notorious for generating high frequency noise that contaminates the gamma band - which is just the frequency band where Mišić et al. found their key results. So how did Mišić et al. mitigate this problem? After noting that they used a beamformer approach to data analysis, they say that

MEG beamformers have been shown to be effective at suppressing ocular and nonocular artifacts, including cardiac and muscle activity (Muthukumaraswamy, 2013), obviating further artifact correction.

That's all they have to say about artifacts. It seems a little blasé to me, but don't take my word for it: here's what Suresh Muthukumaraswamy has to say, in the only paper that Mišić et al. cite as support (emphasis mine).

While beamformer source-reconstruction images are not explicitly an artifact-removal algorithm, high-frequency artifacts in these images tend to localize to their source locations, making them relatively easy to spot in source-reconstruction images. Spatially filtered, source-space “virtual” sensors can then be subjected to subsequent analyses. However... for beamformer virtual electrodes, caution must still be exercised because the channels are not necessarily artifact-free, particularly if the spatial filters are relatively coarse and the artifacts are relatively large.

Muthukumaraswamy went on to state a number of "Recommendations for the Collection, Analysis, and Presentation of High-Frequency MEG/EEG Experiments". Mišić et al. seem to fall short of many of these. For instance

#1. Presentations of data that use statistical analysis only, without first presenting spectral or spatial representations should be avoided.

#2. Presentation of (time-)frequency spectra is critically important. The spectrum should be presented in a way such that the full bandwidth of the high-frequency activity of interest is visible.

There are no time-frequency spectra in the paper.

#3. Presentation of spatial maps (topographic maps and/or source localizations) for high-frequency activity is important. When broadband activity arises near the edge of the sensor/electrode montage, or the source solution space, this may be an indicator of electromyographic [muscle] contamination

#9. Collection of EOG [electrooculogram; i.e. to enable detection of ocular artifacts] is highly desirable for both MEG and EEG. Where feasible and appropriate, eye-tracking should also be considered. Again, this is particularly important for frontal and temporal sources.

No EOG or eye-tracking was collected in Mišić et al. so the role of eye movements is unknown. Their key results come from frontal and temporal sources. In his paper Muthukumaraswamy gives an example of how insidious non-neural artifacts can be, pointing to a 2011 MEG study from his own lab which seemed to show high gamma activity in the cerebellum associated with making a response to a stimulus using a joystick. But this was, Muthukumaraswamy says, almost certainly nothing more than muscles in the neck which contracted as people leaned forward to grasp the joystick. Here's Figure 2 from Muthukumaraswamy's paper, showing the issue. In panel C, the time-frequency plot, we see that the stimulus-evoked activity is "broad-band", spanning the range of frequencies from 50 to 150 Hz. No neural signal has such as wide range so Muthukumaraswamy says that his data was "highly likely" to be an artifact.

It's easy to imagine how Mišić et al.'s traumatized soldiers might have reacted more strongly to the triggering stimuli in terms of muscle movements: maybe they showed jaw clenching, tenseness, postural changes, different eye movements, etc. Whether Mišić et al.'s data contain such artifacts or whether they explain these results is impossible to determine: I don't know if muscle or ocular artifacts could increase synchrony across brain regions, as Mišić et al. found. But I would have expected peer reviewers (at the Journal of Neuroscience no less) to have requested some checks and balances to clarify this point. Edit 19th January 2016: I've clarified the discussion of Mišić et al.'s group comparisons and the passage on Muthukumaraswamy's figure.