#75: Social Life Begins in the Womb 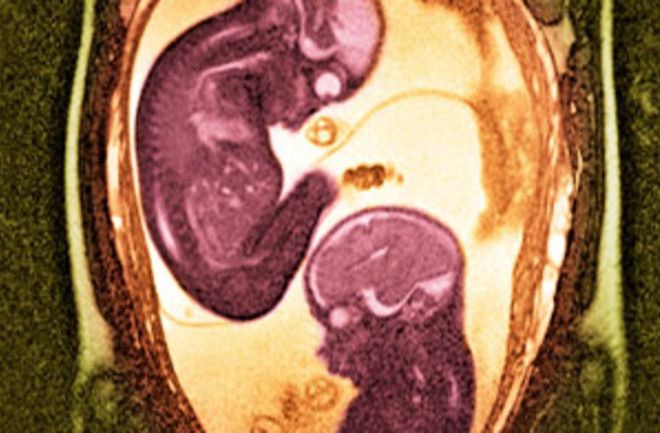 Humans are so social that newborn babies are able to imitate facial expressions of the people around them. In fact sociability begins even earlier, in the womb, according to Umberto Castiello and his team at the University of Padova. They used state-of-the-art ultrasound to monitor the movements of five pairs of fetal twins, between 14 and 18 weeks of gestation. The results, reported last October, show that even the youngest fetuses in the study recognized and responded to the other twin.

When reaching toward the co-twin—especially around the eyes and mouth—their motion was relatively slow and delicate. When the fetuses touched themselves, on the other hand, they were less cautious (although they approached their own eyes and mouth more gingerly than other parts of their body). They were roughest toward the uterine wall, kicking and shoving it with force. “In some very primitive form,” Castiello says, “it appears that the fetus by the second trimester already has a sense of ‘self’ that is different from ‘other.’ ”

Andrew Meltzoff, the psychologist who discovered infant facial imitation back in the 1970s, agrees. “If these findings are right,” he says, “the birth of sociality occurs before physical birth—a fascinating prospect.”