Who needs sunscreen when you have chocolate? 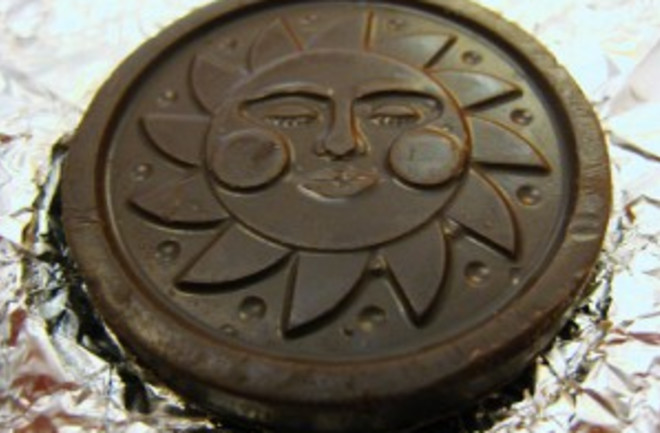 Tired of slathering on sunscreen every time you want to spend some time outside? Try eating chocolate instead! Chocolate naturally contains very high levels of antioxidants (flavanols), but these are mostly lost during conventional chocolate processing. In this study, the researchers tested whether simply eating high-flavonol chocolate could help protect people's skin from the effects of the sun (measured here by "minimal erythema dose" [MED], or the amount of UV exposure needed to produce a sunburn). Surprisingly, after the subjects ate 20 g of high-flavanol chocolate daily for 12 weeks, their MEDs doubled compared to a control group who ate conventional low-flavanol chocolates. So go ahead, bring your chocolate to the beach ... but maybe think twice about the bikini?

Eating chocolate can significantly protect the skin from UV light. "BACKGROUND: Cocoa beans fresh from the tree are exceptionally rich in flavanols. Unfortunately, during conventional chocolate making, this high antioxidant capacity is greatly reduced due to manufacturing processes. AIM: To evaluate the photoprotective potential of chocolate consumption, comparing a conventional dark chocolate to a specially produced chocolate with preserved high flavanol (HF) levels. METHODS: A double-blind in vivo study in 30 healthy subjects was conducted. Fifteen subjects each were randomly assigned to either a HF or low flavanol (LF) chocolate group and consumed a 20 g portion of their allocated chocolate daily. The minimal erythema dose (MED) was assessed at baseline and after 12 weeks under standardized conditions. RESULTS: In the HF chocolate group the mean MED more than doubled after 12 weeks of chocolate consumption, while in the LF chocolate group, the MED remained without significant change. CONCLUSIONS: Our study demonstrated that regular consumption of a chocolate rich in flavanols confers significant photoprotection and can thus be effective at protecting human skin from harmful UV effects. Conventional chocolate has no such effect."