What Was Causing This Newborn's Startling Seizures?

Seizures in infants can signal serious trouble, but she looked perfectly healthy otherwise. 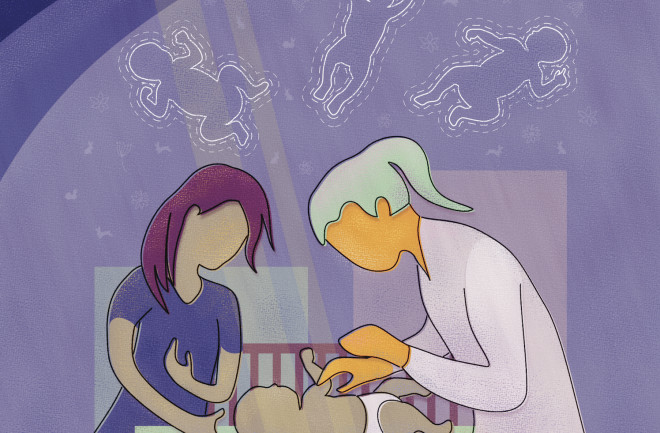 The tiny and rosy 6-day-old girl moved strangely on the bed, like an awkward teen at her first school dance. Her arms jerked rhythmically, twisting the soft bunny-and-flower-print blanket surrounding her.

“Sophie has been making these funny movements for a few days,” her mother told me. Newborns commonly make odd, sudden movements; they usually turn out to be normal startle reflexes or benign sleep behaviors. But this mother had four other children, and she was sure none of her other babies had ever moved like this. She shared several videos of her daughter she had recorded at home. All concerned me — they looked more like seizures than anything we pediatricians expect with normal baby wriggling.

Seizures in infants are often the sign of something worrisome, including infection, trauma to the brain, and abnormalities in salt or sugar levels. Generally, infants with these problems look quite ill. They’re often hot with fever, limp, lethargic, pale and jittery. Yet baby Sophie looked practically perfect; she was cooing happily and breastfeeding vigorously. She had been born on time without any complications after a normal pregnancy, and didn’t have any of the risk factors we usually see in seizing newborns.

As we prepared to draw some blood to check for potential causes, Sophie’s left arm began to twitch. Soon, her entire body was racked with convulsions, her arms and legs shaking, her eyes rolled back. Her mother stood by tearfully as we drew up a dose of medicine to stop the seizure. Yet before we could administer it, Sophie calmed, her arms and legs relaxing as she regained consciousness. Her mother scooped Sophie up to snuggle her.

Sophie’s seizure had thankfully stopped on its own after less than a minute. But the search for its cause was now more urgent than ever.

Our initial tests revealed Sophie’s brain showed no indications of trauma or altered structure. She had no signs of infection in her urine, blood or spinal fluid. The levels of salt and sugar in her blood were also normal, but another key electrolyte was off: Sophie had a critically low level of calcium. Calcium is integral to the functioning of nerve, muscle and cardiac cells. Deficiencies can cause abnormal muscle movements, problems with bone growth, abnormal heart rhythm and pumping and, yes, seizures. We quickly gave Sophie an IV infusion of calcium before transferring her to the neonatal intensive care unit for more treatment — and to find out why this otherwise healthy baby’s calcium was so low.

The majority of calcium in the human body is stored in the bones. The amount released into the bloodstream is tightly regulated by an intricate dance with other important hormones, such as the parathyroid hormone, and nutrients like phosphate, magnesium and vitamin D. Hypocalcemia, or low levels of calcium, is often due to altered levels of these other hormones and nutrients.

Most of an infant’s calcium stock is provided by the mother through the placenta in the last trimester of pregnancy. After birth, infants have a natural drop in their calcium levels within two days of age. Their levels then rise as they begin to get calcium through their diet, and their calcium-regulating hormones begin to function better. Yet Sophie’s calcium wasn’t rising as expected.

Causes of newborn hypocalcemia can have their source in either the mother or the baby. If the mother has diabetes during pregnancy, or problems with her own calcium-regulating hormones, she may not pass along enough calcium to her fetus. If infants are born prematurely, are starved of oxygen during the birth process, have inherited kidney problems, or have DiGeorge syndrome — a rare genetic illness in which they cannot make normal levels of parathyroid hormone — their bodies can be deficient in calcium. When this happens, seizures can occur.

While keeping Sophie seizure-free with regular doses of calcium and vitamin D, neonatologists did a barrage of tests to check her kidney function, bone structure, calcium-regulating hormones and genes; no culprits were found. They then turned to her mother for answers.

Sophie’s mother did not have any known medical problems. Her own kidney and hormone functions were normal, and she hadn’t had high blood sugar during pregnancy. Yet the answer did lie within her blood — Sophie’s mother was found to have extremely low levels of vitamin D.

We get vitamin D from two main sources: in the food we eat or supplements we take, as well as through sun exposure. With the latter, the UV light interacts with a precursor molecule in our skin to convert it to the vitamin. A proper supply of vitamin D is essential to maintaining normal levels of calcium.

Studies in a variety of countries show that vitamin D insufficiency is common in women of childbearing age, yet Sophie’s mother’s was unusually severe; her vitamin D level was barely above zero. At that amount, it would’ve been impossible for her body to pass along enough calcium to Sophie during pregnancy or breastfeeding.

More discussion with Sophie’s mother revealed her strained finances, which made it hard for her to eat enough fortified milk, fish and egg yolks. She chose to give those foods to her growing children, leaving little of the key sources of vitamin D for herself. She also had little time or opportunity to be outside in the sunshine, living in an apartment in a neighborhood without many parks or safe outdoor spaces. Plus, while she was pregnant with Sophie, an unusually cold winter had kept her inside even more than usual. Sophie’s mother was left without the proper nutrition and sunlight needed for adequate vitamin D for both herself and her in-utero baby.

After Sophie’s birth, her mother was committed to breastfeeding, not realizing that breast milk provides ideal nutrition — except for vitamin D. That’s why pediatricians recommend exclusively breastfed infants take a vitamin D supplement, but Sophie was too young to have had her first visit for this reminder. Thus, Sophie started life with minimal calcium and was unable to get more from her diet in those critical first days.

After extensive and complex testing, it turned out all Sophie and her mother needed were a few simple vitamins. The hospital’s doctors, nurses and social workers helped ensure Sophie’s mother had support to provide food and vitamins for herself and her daughter. They encouraged mom to take Sophie on sunny walks as the weather warmed. Sophie no longer moved strangely, now seizure-free thanks to enough calcium and vitamin D. She was able to safely return home to her siblings, who were eager to get to know their sweet new sister.

Julia Michie Bruckner is a pediatrician at Children’s Hospital Colorado. The cases described in Vital Signs are real, but names and certain details have been changed.

More From Discover
Health
The Best Times of the Day to Eat, According to Science
Health
10 Science-Backed Ways to Boost Your Brain
Mind
Can Playing Video Games Make You Smarter?
Health
Calorie-Restricted Diets May Not Live Up to the Hype
Health
6 Ways to Exercise Outdoors in Winter
Health
What Factors Matter Most For Weight Loss?
Recommendations From Our Store
My Science ShopDiscover STEM Kits
My Science ShopDiscover 2022 Calendar
My Science ShopStrange Science
My Science ShopElements Flashcards
Shop Now
Stay Curious
Join
Our List