What Science Says About the Potential Health Benefits of Kombucha

Kombucha is often hailed as a healing elixir — but are the health claims too good to be true? 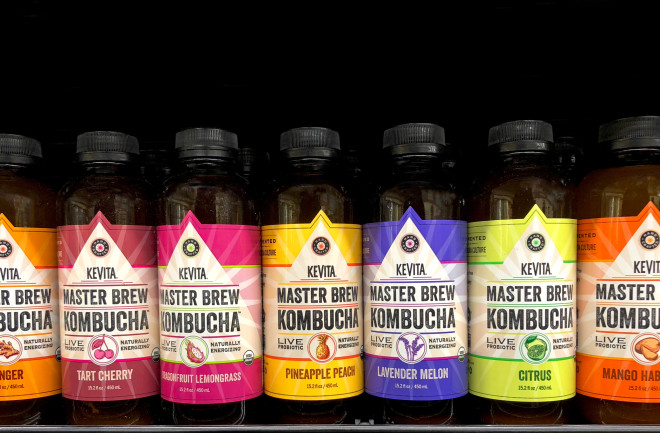 Kombucha is tasty and easy to find in stores — but are the health claims backed by science? (Credit: Sheila Fitzgerald/Shutterstock)

We live in interesting times. Health consciousness is in vogue, and so is mistrust of mainstream medicine. “Ancient” is often understood to mean “effective.” So it’s no surprise that kombucha, a fermented tea that dates back some 2,000 years, is the wellness drink of choice for many.

Pronounced “kom-BOO-cha,” the drink is a fusion of sugar, bacteria, yeast and, sometimes, fruit. Many people enjoy the tart, slight sweet taste of kombucha and may use it as a stand-in for soda or cocktails. But, undoubtedly, kombucha’s popularity is also powered by its purported health benefits — rumors that can be traced to the fermented tea’s origins.

Proponents of kombucha say it supports digestion, metabolism, immunity, liver function and more. Staunch kombucha evangelists say it can fight a variety of ailments, from hair loss to obesity to diabetes — even cancer and AIDS. A bit of “booch,” as it’s affectionately known, is also thought to rejuvenate, revitalize, reenergize and restore one’s body and mind.

But is kombucha a legitimate health panacea, or just another wellness fad?

“Kombucha’s popularity suggests people are interested in incorporating seemingly ‘healthy’ options into their diet,” writes Julie Kapp, an epidemiologist at the University of Missouri, in an email to Discover. “However, there is often a gap, unbeknownst to the average consumer, between marketing and science.” Kapp co-authored a 2019 review of kombucha studies that was published in the Annals of Epidemiology.

As with many other wellness trends, the jury’s still out on kombucha’s healing potential. There simply hasn’t been much research in humans to support — or refute — the health claims made about the drink.

That said, kombucha has caught the eye of scientists, who are both studying — and sipping — the beverage. Athena Aktipis, an evolutionary biologist at Arizona State University, became interested in the science of kombucha after developing an affinity for the beverage herself.

The History of Kombucha

Kombucha’s reputation as a miracle elixir isn’t a recent development. Kombucha is thought to have originated in China around 220 B.C., where it was first used as a general healing and digestive aid. Over the centuries, the “tea of immortality” slowly made its way around the globe through trade routes.

In A.D. 414, a Korean physician named Dr. Kombu reportedly introduced the fermented drink to the ailing Japanese Emperor Inkyo. According to legend, the emperor was so impressed with kombucha that he named it kombu-cha, or Kombu’s tea.

Around 1900 (but possibly earlier) Kombucha made its debut in Russia, where it flourished as a homemade beverage. In the 1960s, a German doctor made unproven claims that his kombucha brew could fight cancer. Around the same time, researchers in Switzerland reported that drinking kombucha was as beneficial as eating yogurt.

America’s first taste of kombucha likely came during the 1970s, as the initial wave of the natural food movement took root. But kombucha never quite found its place on the American table during the processed-foods heyday of the ’80s and ’90s.

But times have changed. Microbiome research has revolutionized our understanding of our health. Understandably, this has prompted people to search for ways to keep their gut bacteria in good shape. And many view kombucha as the answer.

Inside every batch of kombucha is a diverse and cooperative ecosystem of microbes that work together to make the beverage, Aktipis says. The process starts by introducing a symbiotic colony of bacteria and yeast (also known as a SCOBY) into sweetened green or black tea. This concoction is left to ferment somewhere between a week and a month as several chemical changes occur. Essentially, the yeast and bacteria work on breaking down the sugars into alcohol, and the alcohol is then converted into compounds like acetic acid, or the stuff that gives kombucha its tang.

This is a SCOBY, where the yeast and bacteria that make kombucha live. (Credit: GreenArt/Shutterstock)

The end result is a beverage that’s rich in B vitamins, antioxidants and other compounds. But it’s kombucha’s probiotics — or good-for-you bacteria — that has piqued collective interest. And in this regard, kombucha might have a leg up over some other probiotic options out there.

“When you are consuming any kind of probiotic, if you’re taking a single species that doesn’t have an ecological network, my guess is that there’s not as many benefits to that as consuming an ecological community of microbes [like those in kombucha],” Aktipis says.

How the microbes from kombucha interact with the other 100 trillion that already live in our digestive tract, if at all, remains a mystery. Scientists don’t have proof that microbes in kombucha actually colonize our guts. But, technically, the microbes do become a part of our microbiome until they leave our bodies as waste, Aktipis says.

“When it comes to consuming fermented foods, if they’re a regular part of your diet, those microbes spend a lot of time in your digestive tract where they can be having effects, even if they aren’t permanently colonizing,” she adds.

Officially, the microbes in kombucha have not been confirmed to be probiotic, or beneficial. And some experts say the probiotics may not be able to survive the acidic environment of the stomach.

It’s also important to note that not all kombuchas are created equal. That $4 bottle of kombucha might have a different microbial profile than the one sitting next to it on store shelves. Some have juice or sugar added to them. And some producers pasteurize their kombucha to halt the fermentation process in order to keep the alcohol content low — which may cancel out some of the potential benefits of drinking kombucha, Kapp explains.

As kombucha has become more mainstream, some large-scale brewers have gotten into legal trouble, with allegations ranging from falsely advertising probiotic content to not being as low in sugar or alcohol as claimed.

In 2019, Kapp led a review of 310 studies on kombucha and found just one that examined the tea’s effects in humans. In the study, 24 adults with type 2 diabetes consumed kombucha for three months, which resulted in average blood sugar levels normalizing. But there were some major limitations to the work — not only was the study small, it didn’t include a control group.

Kapp says randomized, clinical trials on people could help clear up some of the misinformation and confusion over kombucha health claims.

“If kombucha has health benefits, important subsequent studies will need to address the following [questions]: At what dosage, frequency, and duration? In what populations and subpopulations?” Kapp adds.

As kombucha’s popularity grows, likely so will interest in studying kombucha. Even if scientists find that it doesn’t quite live up to its reputation as a magical healing elixir, we can still enjoy kombucha for kombucha's sake.

“When it replaces less-healthy options like sugary sodas, that alone is a health benefit,” Kapp says.