What happened to all the giant mounds of dinosaur poop? (Hint: it involves cockroaches) 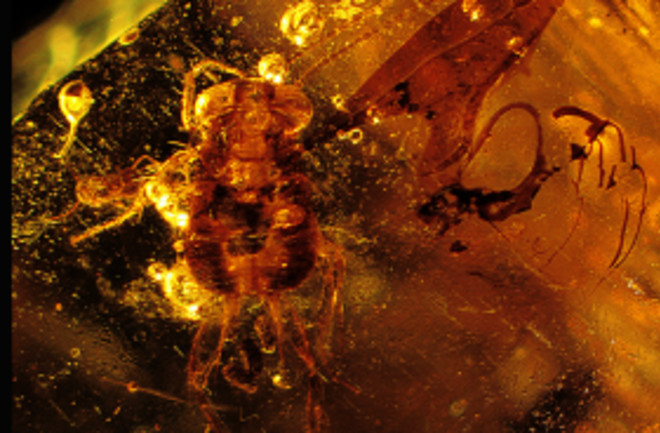 Figure 1: Cockroach preserved in amber.What's grosser than heaping piles of steaming dinosaur excrement? Heaping piles of steaming dinosaur excrement being ravenously devoured by cockroaches, of course! In this study, the authors sought to determine what happened to all the poopy poop the dinosaurs pooped out while pooping (especially because "Dung beetles and flies with rapid development were rare during most of the Mesozoic"). To do so, they analyzed the poop of a cockroach preserved in amber to determine whether it might have eaten dinosaur poop. They found small pieces of wood with smooth edges, suggesting "external pre-digestion" (i.e., it already passed through a dinosaur's gut). Poop positive!Cockroaches Probably Cleaned Up after Dinosaurs "Dinosaurs undoubtedly produced huge quantities of excrements. But who cleaned up after them? Dung beetles and flies with rapid development were rare during most of the Mesozoic. Candidates for these duties are extinct cockroaches (Blattulidae), whose temporal range is associated with herbivorous dinosaurs. An opportunity to test this hypothesis arises from coprolites to some extent extruded from an immature cockroach preserved in the amber of Lebanon, studied using synchrotron X-ray microtomography. 1.06% of their volume is filled by particles of wood with smooth edges, in which size distribution directly supports their external pre-digestion. Because fungal pre-processing can be excluded based on the presence of large particles (combined with small total amount of wood) and absence of damages on wood, the likely source of wood are herbivore feces. Smaller particles were broken down biochemically in the cockroach hind gut, which indicates that the recent lignin-decomposing termite and cockroach endosymbionts might have been transferred to the cockroach gut upon feeding on dinosaur feces." Related content: NCBI ROFL: Jeez people, enough with the cockroaches in your colons already.NCBI ROFL: Rambling roaches require receivers to run 'round roadblocks.NCBI ROFL: Female cockroaches avoid slutty males.