Vaccine Production Is Horribly Outdated. Here Are 3 Ways to Fix It.

The traditional method of growing vaccines in chicken eggs may be too slow and inefficient to protect the U.S. 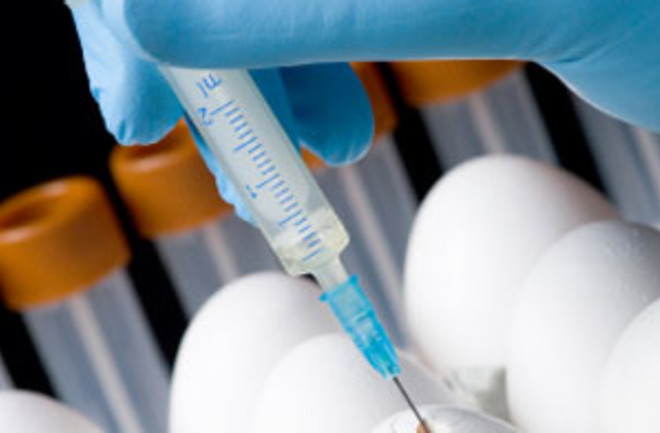 From the day it was first reported in Mexico, swine flu took less than four months to become a full-fledged worldwide pandemic. So what’s the most effective way to stop the virus from infecting most of the globe? Widespread vaccination—which is why U.S. health officials are debating a nationwide swine flu vaccination program that would mandate the creation of 600 million immunizations, more than five times the 115 million vaccines administered each year to battle the seasonal flu.

Because of the flu virus’s notorious ability to mutate, a large-scale immunization program would require manufacturers to quickly produce vast quantities of vaccine.

Unfortunately for all of us, it’s unlikely that current vaccine production methods—which have been in use for more than half a century—could produce the quantity of vaccine that would be necessary in an emergency. Today’s vaccine production is so slow, costly, and inefficient that the U.S. Department of Health and Human Services allotted $1 billion in 2006 toward the development of new techniques.

With the first trials for a swine flu vaccine currently underway in Australia, the question of how to produce huge quantities of vaccine quickly has never been more pressing. In particular, three new techniques under development could be the answer should another pandemic occur.

Vaccines work by exposing the body to particles called antigens, which trigger an immune response. In most modern vaccines, antigens come in the form of bits of deactivated virus. When the body senses these particles, it kick-starts specialized immune defenses, including the production of immune cells known as lymphocytes, which learn to recognize and attack viral DNA. Once the body eliminates the invaders, it stores a "memory" of that particular invader for years, guarding against future infections.

The traditional way to produce vaccines involves injecting live viruses into a fertilized chicken egg, then letting the egg incubate and become infected with the virus. Afterwards, the liquid inside the egg is removed and mixed with an embalming fluid called formalin. It renders the virus incapable of causing an infection but still provokes the immune response that will protect vaccine recipients against future infections. Not all vaccines are produced using the same antiquated system; for example, the HPV vaccine known as Gardasil, which was approved by the FDA in 2006, is made in yeast cells. But flu vaccines are still produced within eggs.

Unfortunately, this process is fraught with problems: It’s slow (the eggs typically need to incubate for about half a year), inefficient (on average, it takes one to two eggs to yield a single dose of vaccine), and unreliable: Not only can the eggs spoil, but they may also produce the virus at varying rates. As a result, the serum they yield may be too weak or impure to provide immunity with the lowest possible incidence of side effects.

For these reasons, scientists are working on new methods to combat these problems. Of course, often the new methods present problems of their own, which the researchers must iron out before the techniques become ready for wide-scale production.

You Can't Have Dessert Till You Eat Your Vaccines

One technique involves genetically modifying edible plants to produce vaccine antigens. Scientists have already developed a potato that boosts immunity against Hepatitis B, and are working on vaccine-producing peanuts. Rakesh Tuli, of India’s National Botanical Research Institute in Lucknow, is developing antigen-spiked nuts to protect against cholera and rabies. He says that because the nut crop is high in protein, it produces vaccine antigens more efficiently than does a leafy plant. In fact, his analysis indicates that a football-sized field plot could yield 450 million doses of vaccine. “Two acres of land is enough to vaccinate a population the size of India,” Tuli says.

Unfortunately, although these plants show promise, it’s questionable whether these edible vaccines will ever be mass-produced for flu or any other disease. The technique remains highly controversial among environmentalists, despite the enthusiasm of researchers like Tuli. “In the last few years, we’ve decided that it’s probably not a good idea to produce [vaccines] in food products,” says Hugh Mason, an Arizona State University vaccine researcher who helped develop the first edible vaccine. “No matter how careful you are, even if you establish regulations, there’s always a chance that someone would not follow the guidelines,” thereby contaminating wild plants or food crops with genetically engineered ones, he explains. If modified plants escape into the natural environment, they could contaminate water supplies, irreversibly alter wild species, or even enter the human food chain, which nearly happened in 2002.

There’s also the matter of antigen regulation. Because many of these genetically modified vaccines are meant to be eaten, it can be difficult to regulate exactly how much antigen a half-cup of potato or a handful of peanuts delivers. “Ultimately, an edible vaccine might lose its antigenic activity,” Mason says.

Still, some scientists maintain their faith in plant-produced vaccines, saying that the plants could be grown in a greenhouse to make sure modified plant material remains separate from wildlife. “We are talking about isolated, protected cultivation to make sure that vaccine plants will not get mixed up with non-vaccine plants,” says Tuli, who believes the cost of an acre-large greenhouse would be small compared to the efficiency and savings of the new method.

Infecting a Plant to Save a Human

To avoid the problems that come with altering plant genes, other researchers are investigating a plant-based technique that does not fundamentally change a plant’s DNA. Instead, this method combines a small amount of DNA from a human-infecting virus, like influenza, with a plant virus known as tobacco mosaic virus. This hybrid virus then infects a plant, eventually killing it—but not before the virus replicates, producing scads of vaccine proteins in the process. In this technique, the DNA of the human virus is not incorporated into the plant’s genes, so it isn’t present in the seeds or pollen. Additionally, the plant containing the hybrid virus can be easily incinerated.

“As the virus kills the plant, we harvest the vaccine before the plant withers and falls apart,” says Charles Arntzen of Arizona State University, who worked with Hugh Mason on plant vaccines. “The virus tries to behave like a virus, replicating and reproducing its genes. But instead of making a virus, it makes the proteins we’re interested in.” Extracting the vaccine would be simple; manufacturers could squeeze the bright green juice from the tobacco leaves, harvest the human viral DNA, and then destroy any remaining traces of the genetically mixed virus.

“Because [the tobacco virus] kills the host it’s in, it’s not going to spread and appear someplace else,” Arntzen says. “From an environmental standpoint, it’s a dead-end genetic mechanism, but one that we can exploit to manufacture what we’re interested in.” This method may be more viable than edible vaccines for two reasons: The tobacco plants see no permanent genetic alteration, which means a much lower risk of an environmental impact, and the vaccines are extracted in a liquid and then administered as injections, meaning no rotten potatoes or unpredictable vaccine doses.

One Pest to Get Rid of Another

The third way researchers hope to galvanize vaccine production doesn’t involve plants, and it could be the method that is the closest to filling a syringe near you. In this technique, researchers inject a strip of viral DNA into the gene sequence of E. coli bacteria, then allow this hybridized cell to multiply and produce the desired antigen. It takes only a day to grow enough of these bacteria to fill a 1,000-liter tank—enough to provide about 400 million influenza vaccinations. That’s two-thirds of the dosages that would be necessary if U.S. health officials go forward with their immunization campaign. It’s also a stark contrast to today’s egg-based technology, which takes about six months to produce a mere 100 million doses, according to Alan Shaw, CEO of VaxInnate, a company at the forefront of bacteria-based vaccine production.

Still, experts can’t say whether vaccines produced with any one of these new techniques will be ready to displace the egg method in the near future. Plus, even if we convert to bacteria- or plant-based vaccine production, it’s difficult to predict whether lower manufacturing costs will transfer to the consumer—when it comes to pharmaceuticals, the price of producing a vaccine or drug is just one variable among many that ultimately determine how much you’ll pay at the doctor’s office.

But necessity may bring progress. As new disease strains continue to develop, and globalization and travel make it easier to pass disease across geographical borders, the ability to whip up huge quantities of effective vaccine is becoming increasingly important. “One of the things I think we humans will find ourselves facing on an ever greater frequency,” Shaw says, “is some kind of an emerging pathogen that pops somewhere.” And while the death count is nothing to celebrate, a pandemic like swine flu may be just what’s needed to boost these new technologies, and carry our outdated vaccine production methods into the 21st century.