As Swine Flu Spreads, Focus Shifts to a Potential Vaccine 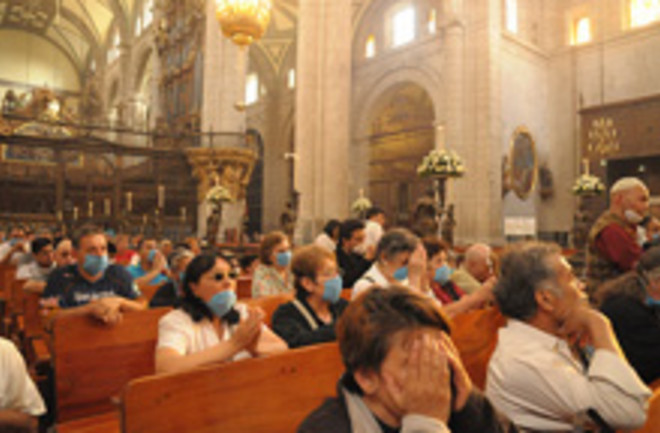 As the swine flu outbreak continues to spread, with Russia, South Korea, and Australia joining the list of countries with suspected cases and the death toll climbing in Mexico, attention has turned to the potential of a swine flu vaccine that could protect populations from infection. But a new vaccine takes some months to develop. Says Iain Stephenson, an expert on flu vaccines:

"We are in a position where if a swine flu virus becomes a pandemic we don't currently have a vaccine for it.... I think that it is unlikely there will be widespread vaccine in less than six to eight months" [Telegraph].

In the meantime, says Stephenson, patients can be treated with antiviral drugs. International health officials haven't yet decided whether the swine flu poses a serious worldwide threat that would call for the immediate prioritizing of a vaccine. The pharmaceutical company Novartis said it

had received the genetic code of the new virus strain, enabling it to start work on evaluating production, and it hoped to receive the actual virus in its laboratories "in the near future." ... But the World Health Organisation (WHO) said it would only call for large-scale production of such a pandemic vaccine if it strongly believed the world was on the edge of an unstoppable global outbreak of flu [Reuters].

Vaccine companies are currently producing the seasonal flu vaccine, and health officials worry that calling them off that task could lead to shortages of the common flu shot. If drug companies are given the green light to start production of the new vaccine, most will use a traditional method called the attenuated method, in which scientists grow the new strain of virus in chicken eggs. The virus is then killed to make it safe. Upon injection, the dead virus acts as an antigen that trains the immune system to recognize the virus, so that a real infection would trigger an immediate immune response. But even

though vaccine is more efficiently produced than in the past, say WHO officials, some infectious-disease experts say eggs can be unreliable. "They can go bad, the strain might not grow fast enough, or at all" [USA Today],

says vaccine expert Brian Currie. Growing the virus is cell cultures is a slightly faster process, although some experts argue that both egg and cell culture approaches are outdated.

If the swine flu spreads rapidly, the government may turn to companies whose experimental technologies promise to yield large batches of vaccines more quickly. [Start-up company] Vaxart makes vaccines by combining an antigen – in this case, the swine-flu DNA – with a non-replicating viral vector and an adjuvant that boosts the immune response. This “modular” approach is about two months faster than egg or cell-culture systems, said Chief Executive Mark Backer. If swine flu becomes a large problem, U.S. regulators may permit Vaxart and others to move rapidly from animal research to human studies, he said [The Wall Street Journal].