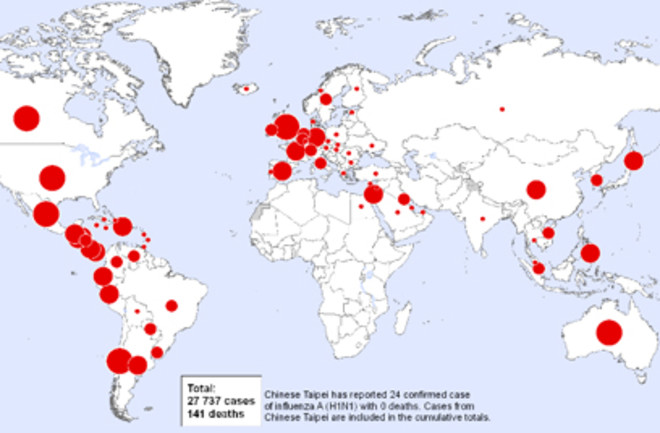 The World Health Organization is expected to officially classify the ongoing H1N1 swine flu outbreak as a pandemic in the next couple of days, but health officials are taking pains to stress that the "pandemic" label only indicates that the virus is spreading through communities in more than one region of the globe--it does not mean that the virus is killing everyone in its path. WHO official Keiji Fukuda explains:

"It does not mean that the severity of the situation has increased or that people are getting seriously sick at higher numbers or higher rates than they are right now.... One of the critical issues is that we do not want people to 'over-panic' if they hear that we are in a pandemic situation" [Reuters].

The alert level is currently still set at 5, indicating that the virus is spreading from person to person in one geographic region, and that a pandemic is imminent.

So far, over 26,500 people have been infected worldwide and about 140 have died of swine flu. Australia has reported a sharp rise in cases since last week — to 1,260 by late Wednesday. Australian authorities say many cases cannot be traced back to travelers or common infection sites such as schools, indicating that — like in Mexico, the United States and Canada — the virus is becoming entrenched in communities [AP].

The number of cases has also spiked in countries Britain, Spain, and Japan, suggesting that the virus is taking hold in several different regions. Officials also believe that many more people around the world have been infected with mild cases, but that they didn't feel ill enough to get tested for the H1N1 virus.

WHO officials worry that a pandemic declaration will lead people with mild illnesses to overwhelm emergency rooms. "In earlier outbreaks, we have often seen that people who are in the category of being worried, but who are not particularly sick, have overrun hospitals," Fukuda said [Los Angeles Times].