US-born women are more likely to crave chocolate during their period. 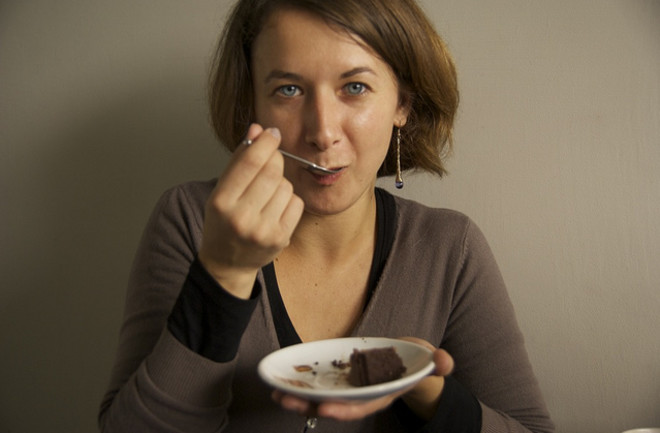 Photo: flickr/Julita BCTo many women, craving chocolate every month is a way of life. But what if we told you that this craving might not be biological, but social? Indeed, according to this study, hankering for chocolate during menstruation is much more common in second and third generation American women than foreign-born immigrants. The authors hypothesize that American women are taught by society that it's OK to indulge during their period "perhaps in an effort to justify consumption of an otherwise 'forbidden' food." They even go on to suggest that the whole concept of cravings in relation to diet might be unique to English-speaking cultures, as "most languages outside of English lack a fully equivalent translation of the term 'craving.'" Now, how can I use that to justify the pint of ice cream I just ate? Does culture create craving? Evidence from the case of menstrual chocolate craving "Craving is considered a key characteristic of diverse pathologies, but evidence suggests it may be a culture-bound construct. Almost 50% of American women crave chocolate specifically around the onset of menstruation. Research does not support popular accounts implicating physiological factors in menstrual chocolate craving etiology. We tested the novel hypothesis that greater menstrual craving prevalence in the U.S. is the product of internalized cultural norms. Women of diverse backgrounds (n = 275) reported on craving frequency and triggers and completed validated measures of acculturation. Foreign-born women were significantly less likely to endorse menstrual chocolate craving (17.3%), compared to women born to U.S.-born parents (32.7%, p = .03) and second generation immigrants (40.9%, p = .001). Second generation immigrant and foreign-born women endorsing menstrual chocolate craving reported significantly greater U.S. acculturation and lower identification with their native culture than non-menstrual cravers (all p < .001). Findings inform our understanding of food cravings, with important implications for the study of cravings in other domains." Related content: What makes chocolate so deliciously melty in your mouth?Flashback Friday: Who needs sunscreen when you have chocolate?Don’t let mama fool you: (fake) study says kisses don’t help booboos.